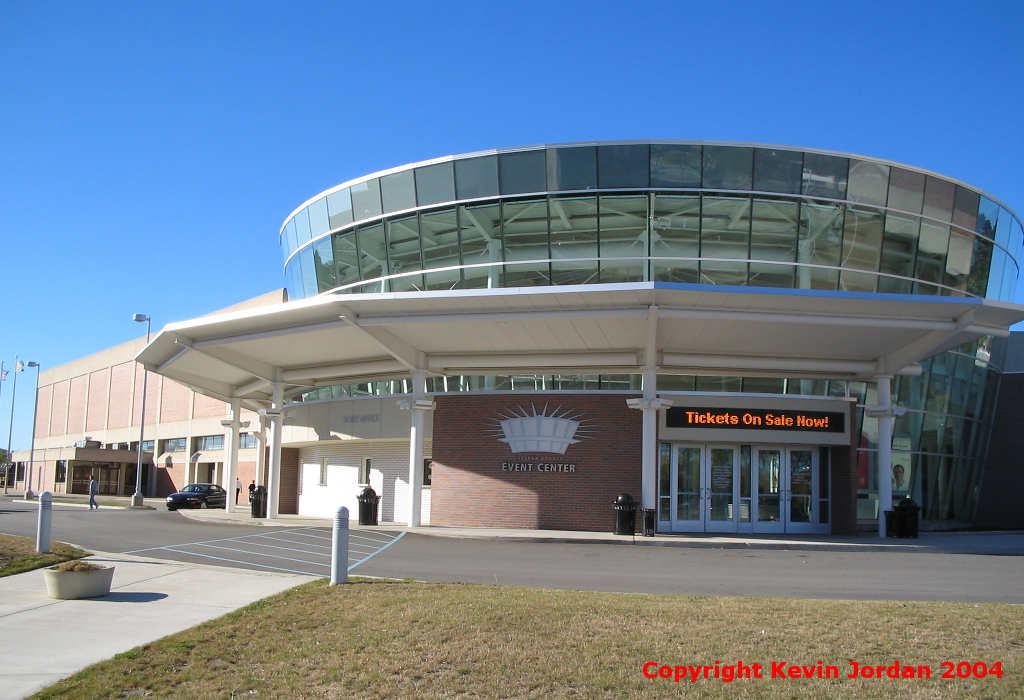 Saginaw was a new, uncharted junior hockey market in the years right after the Spirit moved from North Bay. That first year, talking to the box office on the phone, the ticket agent thought I was coming from London, England. A group of us showed up to Wendler Arena wearing our green and gold, and the ticket-taker thought we were Green Bay Packers fans. Yes, Saginaw was a group of league neophytes, that's for sure. Over the years, though, the team and fans have grown up quite a bit, and it's been a pleasure to watch a new market come to understand, embrace, and finally love junior hockey.

The Dow Event Center is located in the heart of downtown Saginaw, Michigan. It's a stone's throw away from I-675 and is clearly visible from the interstate, which runs right behind the back wall of the arena. The arena is near some other Saginaw landmarks, including the old vaudeville playhouse, the Temple Theater. The building itself looks very much like the 1970's-era design that it is. It's constructed with brown brick and cement and looks like in another life it may have been a high school or a municipal government building. The Event Center consists of the Wendler Arena, an attached theater, and a few convention-center-style rooms. There is also a huge glass pavillion-style lobby on the front of the arena which was built as part of a massive renovation project over the summer of 2003. The renovations brought a building that was apparently almost condemned up to code, and the place sparkles.

Our Saginaw experience usually begins with a trip to the "Blue Line Club" which is a restaurant/sports bar set up in one of the convention rooms. You need a special pass to be admitted, but they're relatively easily obtainable if you have a local contact, or even if you just stand outside looking forlorn. Before and after every game either the team's coach, owner, or one of the players will take the stage and address the season-ticket holders and answer questions, and tell the people what to expect from that night's game. It makes the Spirit accessible to the community and is a fantastic idea in my opinion. The Blue Line club serves liquor and food before every game and the food is excellent.

The arena itself is a split-level design with a concourse running around the length of the building about halfway up the seating area. It's reminiscent of former NHL arenas like Joe Louis Arena or the Continental Arena in New Jersey. To get to your seats from the concourse underneath you have to walk up a flight of stairs. Wendler Arena feels big. It's one of the league's larger arenas at 5,497 seats, but it feels even bigger than that. Seats are exceptionally comfortable. The permanent seats are all blue and padded like movie-theatre seats. After growing up with the wooden, two-man benches at the London Gardens, Saginaw's seats feel like the very lap of luxury! The Spirit have set up a lot of temporary seats down by the glass as well, given that the arena floor is bigger than the ice pad. In one corner there is also a small private banquet area which is enjoyed nightly by bigwigs. Looking through the glass in the lower level can be uncomfortable - the best seats in Saginaw seem to be in the "Upper" area above the concourse, where your seats are elevated and you can see everything on the ice. There is also an upper catwalk circling the arena where the press box and a few private boxes are located. It looks like the view up there would be incredible.

When I was last in Saginaw, the Spirit had what was unquestionably the worst video scoreboard in the league, though judging by recent pictures that has been upgraded since I was last in town. The "intangibles" of the Dow Event Center are generally good. There's a large variety of food available both underneath and in the seats. Local favourites like roasted almonds add to the normal arena food, and if you happen to be sitting close to the booth then the smell will tempt you all game long. A wide selection of souvenirs are available. Bathrooms are generally clean, but you have to go down a flight of stairs from the concourse level to get to them! The arena gets cold when people go outside for a smoke, so the Event Center provides heating lamps in the concourse for the coldest of nights. Music selection is generally good, although a bit too loud for my taste. The team is big on "off-ice entertainment", with a cheerleading team that manages to be ignorable when you don't want to pay attention. The building also has one of the league's most annoying promotions announcers, a young woman whose voice has no level between "off" and "shouting". The team's two mascots are top quality - Sammy Spirit manages to be entertaining without being annoying, which Steagle Colbeagle the Eagle really needs nothing said about him. The team has played their relationship with Stephen Colbert's television show to the hilt as the show had a rinkboard advertisement in 2006-07, and the video board used to show the latest Colbert plug of the league before every game. There is a great hockey atmosphere and the fans are very welcoming and hospitable.

Perhaps more than any other team in the OHL, the Saginaw Spirit like to make their guests feel welcome. Apart from our usual VIP passes, we usually have numerous people come up to us wanting to chat. We even had a nice conversation with the team's owner, Dick Garber, who went out of his way to talk to us, and is usually highly visible at games. People in Saginaw are unbelievable and attending games there is a real joy.

After having their UHL team abducted in the middle of the night in the middle of the hockey season, Saginaw was embittered by hockey and the Event Center came within a hair's breadth of being bulldozed. Instead, the Spirit have done a fantastic job in embracing their community and they have one of the best average attendances in the league. Mid-Michigan was a new frontier for the OHL in the early 2000's, but there can be no greater compliment to the way Saginaw has embraced the OHL than the existence of the Flint Firebirds a few miles down the road, the yang to the Spirit's yin, writing a new, junior hockey chapter in the legendary Flint-Saginaw rivalry. 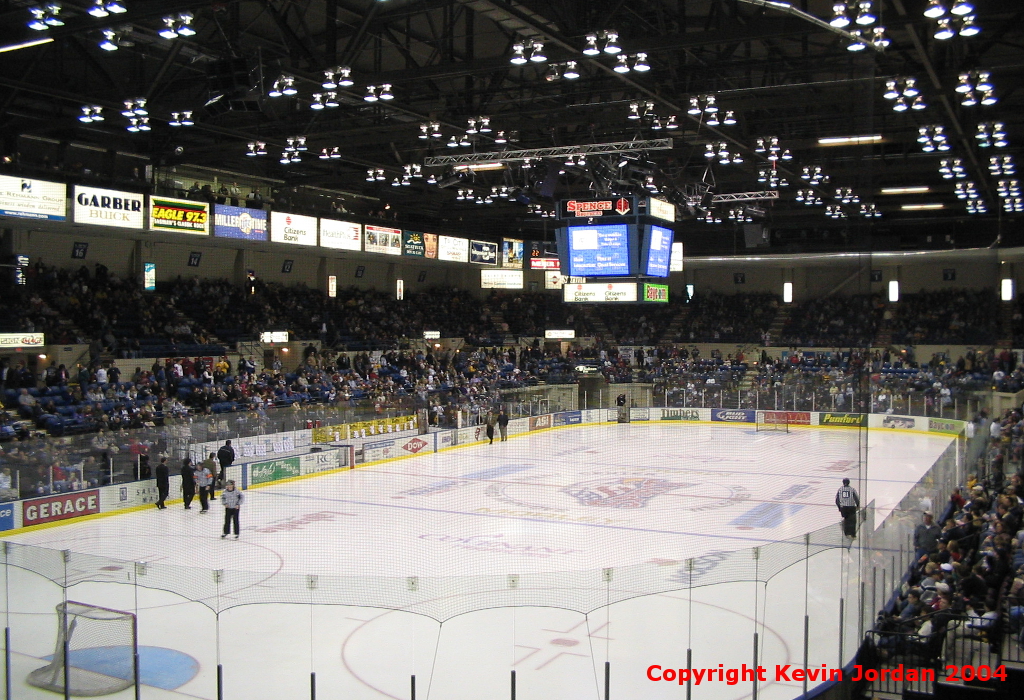 Future Developments
There are no set plans to renovate or replace Dow Event Center, though if the demand ever warrants it, there is a plan to add private suites on the upper "ring" level where the press box is.


Franchise History
The city of St Catharines entered junior A in 1943 with a team called the Falcons. The name was changed in 1947 to the Tee Pees when they affiliated with the Chicago Black Hawks. The name was changed again in 1963 to the Black Hawks. In 1976 this team moved to Niagara Falls to become the Flyers, using a name that had been used before by the team that eventually became the Sudbury Wolves. This second incarnation of the Niagara Falls Flyers remained in that city until 1982, when they moved to North Bay to become the Centennials. The team remained in North Bay for 20 years before moving to Saginaw to become the Spirit in 2002.

Inside the Dow Event Center 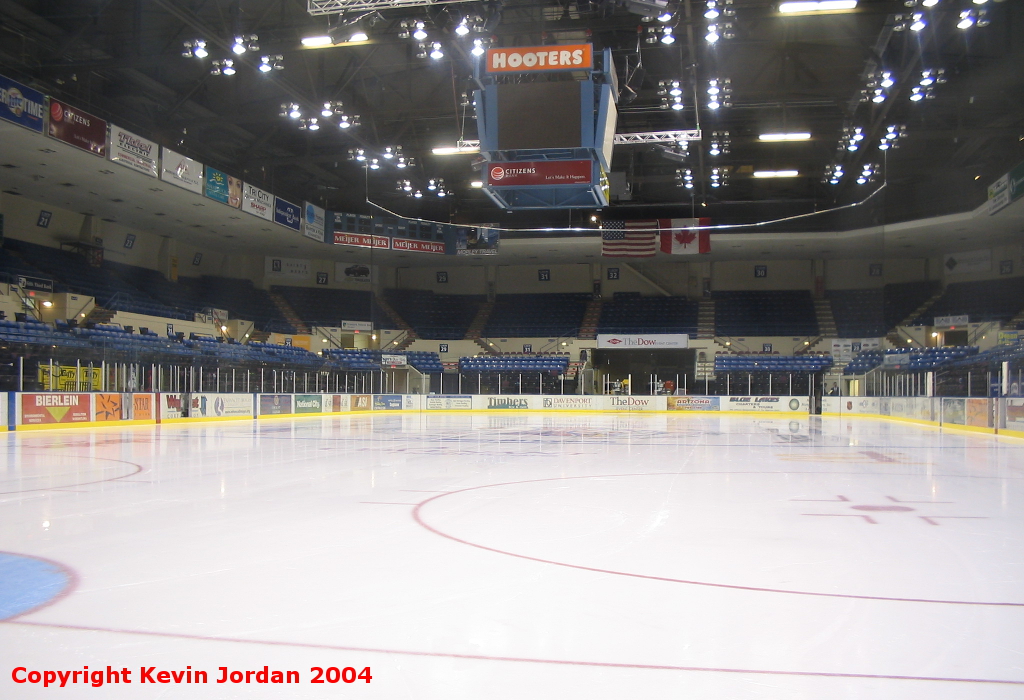