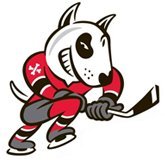 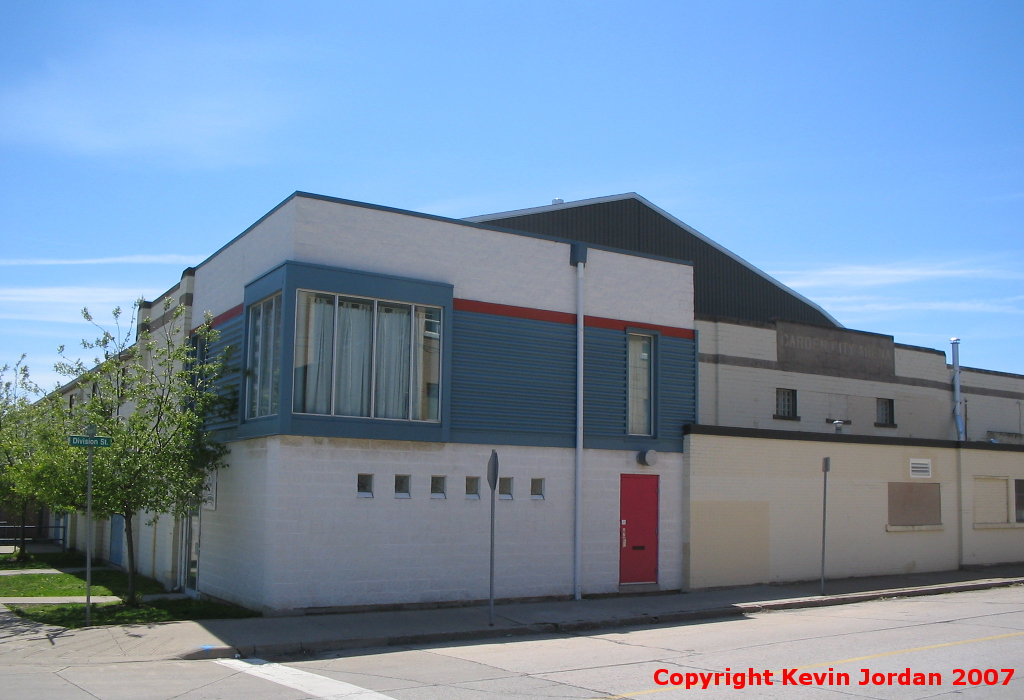 The Niagara Region has a long and storied history with junior hockey. Niagara-based teams won the Memorial Cup in 1954, 1960, 1965 and 1968, and the area's teams produced such hockey talent as Marcel Dionne, Bobby Hull, Bernie Parent and Mike Gartner. In its day, the rivalry between the area's two major cities - St. Catharines and Niagara Falls - was one of the best in the sport. Yet that same rivalry would prove to be the region's undoing, too, since after 1977 when St. Catharines was deserted for the last time, no St. Catharines newspaper would cover a Niagara Falls team, and very few fans from the Garden City made the short trip to watch hockey in the Falls. And vice versa. This indirectly contributed to the last failure of the OHL in the region, as the Thunder refused to advertise to St. Catharines until their last, desperate season, and St. Catharines fans largely ignored the Thunder in return. But all that is in the past now. In 2007, for the first time in history, the two cities started working together under a common regional name, and the results created a solid foundation for the OHL on the Niagara Peninsula.

Garden City Arena was built in 1938 in a residential neighbourhood in St. Catharines. It is a yellow, ancient-looking building that is actually two buildings in one - attached to the main arena is a smaller ice pad, the Rex Stimers Arena. There is also a large new front on the building, as the former rear of the arena has become the new front end. The new addition is blue and features lots of glass, and reminds a history-minded first-time visitor to the place of Prince Charles's famous declaration about the addition to the National Gallery in London: "What is [built] is like a monstrous carbuncle on the face of a much-loved and elegant friend." Still, the older Garden City Arena exterior has its charms.

Walking into what was the CHL's oldest building between 2008 and its closure was an experience that first hits you in the nostrils - it had that indescribable "hockey" smell. The main lobby is new and small, and ticket takers greet you at the foot of a staircase that leads upstairs towards the main arena. Once up on the balcony, you are greeted by a new team store, washrooms, concessions and 50-50 sellers. So far, you could be anywhere in the CHL built in the last twenty years.

That all changes once you enter the main arena bowl. There is, essentially, nothing in sight to let you know that it's no longer 1938, with the exception of a worn-out digital clock overlooking centre ice, and somewhat anachronistic video screens hanging in the corners. The walls are all covered in whitewash paint with painted-on section numbers extending around the building. Frosted, Bauhaus-style factory windows appear every so often on the outer concourse walls. Floors are a painted dark grey and have been worn smooth by decades of hockey fans trodding on them. A tiny press box gondola hangs overtop of the seats on one side of the building, and giant ventilation ducts somehow fit into the scene as well. The roof is wood and supported by an arched ceiling superstructure that is covered in bright silver paint. 3,000 seats surround the ice, all of which are original, wooden two-man benches, painted red on the sides and blue and green in the ends. A portrait of Her Majesty the Queen and Memorial Cup banners from 1954 and 1960 complete the scene perfectly.

The gameday experience at the Jack Gatecliff Arena during the IceDogs' tenure was a good one overall, but with all of the hassles inherent with an older arena. Getting around was nearly impossible when the place was full (as it often was), with the one tiny concourse along the top of the rink being the only way to navigate. The seats are comfortable enough by wooden standards, but the 1938 fire code means that there are as many as forty seats between aisles; as a result, if you're near an end of an aisle you might have had to stand up to let people by many times a game. The last row in particular was and is terrible for seating - there is barely enough leg room up there for a child. Still, the IceDogs definitely got points for making the best of their old arena - the new team store was a nice addition, and there are new washrooms and concessions downstairs in the one end that are accessible to all. The sound system was about what you'd expect - old and getting older - but the gameday announcer was pretty good, with very little extemporaneous shouting or trying to make himself the centre of attention.

It was thirty years between Garden City Arena's two stints hosting the OHL. The league changed almost unrecognizably within those thirty years, and yet St. Catharines and Niagara Falls took to the new team well, with large, passionate, and raucous crowds. When I attended my first and only game there in October 2007, the team had been on the ice less for than a month, and yet there were jerseys and other team gear everywhere, a good sign that the team was already making its mark on the community. The atmosphere on gameday was terrific - when the OHL's smallest and most intimate arena was filled to capacity, the crowd was alive and vocal.

The Burke family only committed to an intitial five-year lease at the Jack Gatecliff Arena on the grounds that progress would be made towards a new arena by the end of that lease. It took until 2014 for the new Meridian Centre to open, but the IceDogs finally have a modern, permanent home, and Jack Gatecliff Arena is back to hosting community hockey. It was nice while it lasted, though - the fans on the peninsula got a team back, and any travelling fan who wanted to partake in the experience got to attend a game at one of the grand old barns of the CHL, unexpectedly alive and thriving for a junior hockey curtain call. 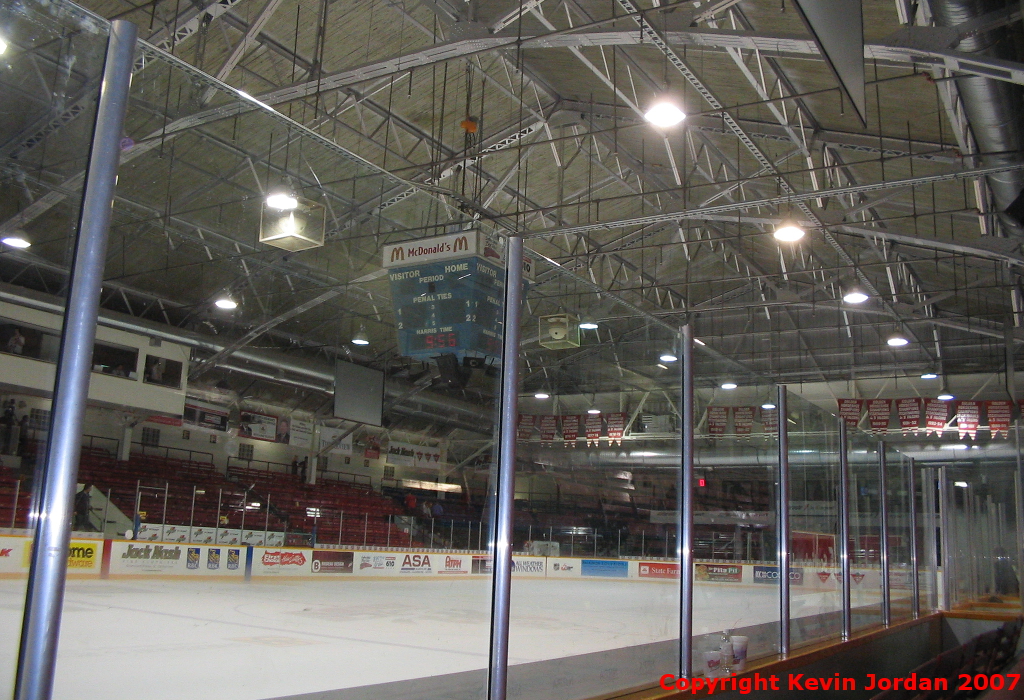 What's the Arena Used for Today?
Jack Gatecliff Arena and the next door Rex Stimers Arena are both still open. Rex Stimers lost its ice in 2018 when the refrigeration plant failed and wasn't fixed or replaced, but Jack Gatecliff is still hosting youth hockey as well as the GOJHL's St. Catharines Falcons. Nearby Thorold is building a new community multi-ice surface which is expected to open in fall 2021, and the city council in St. Catharines is planning to close the Garden City Complex permanently once the new arena is open. One expects it will be demolished at that time.


Inside the Jack Gatecliff Arena 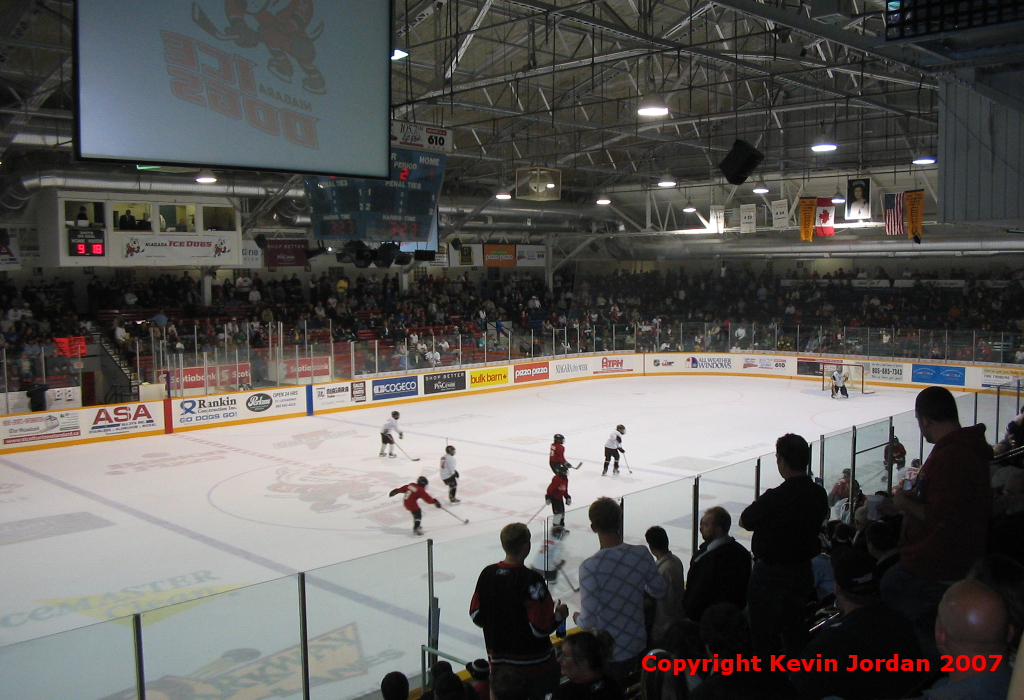 Return to Meridian Centre
Return to the Main Menu