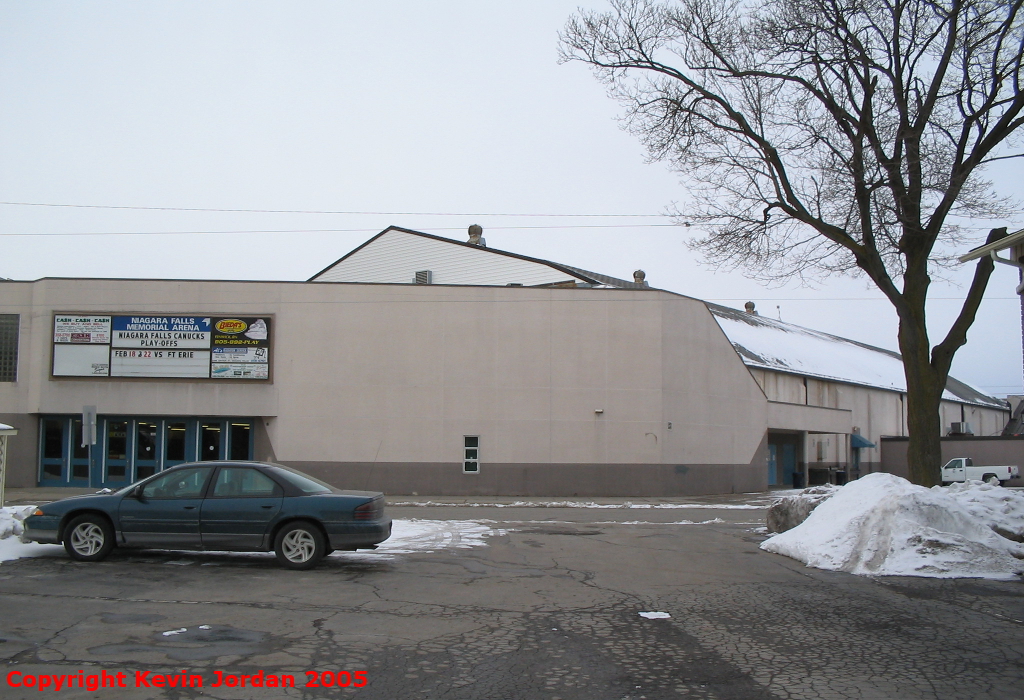 Niagara Falls Memorial Arena is hulking, empty shell now, one of the many arenas built across the province in the aftermath of the Second World War that ultimately has a date upcoming with the wrecking ball. The city council never really properly maintained the building, and by the end of its life the local junior B team was plagued by a leaking roof and structural deficiencies, as well as a parking problem that can only be caused by being located within walking distance of one of the world's largest tourist draws. Still, the OHL survived there on three separate occasions, and the Flyers even won the Memorial Cup twice. With the Niagara IceDogs now firmly ensconced in nearby St. Catharines and no suitable rink in Niagara Falls, the odds of the OHL ever returning to the city appear to be slim-to-nil, but the memories of the old barn still pervade hockey fans of a certain age in the Niagara region.

The Niagara Falls Memorial Arena still stands a few blocks away from the horrendous tourist sleaze of Clifton Hill and Lundy's Lane in downtown Niagara Falls, yet the rink itself is in a quiet residential neighbourhood. The transition is quite amazing - at the corner of Clifton Hill (Centre St.) and Victoria St. a few blocks from the arena, you're surrounded by acres of neon and wax museums, yet walk west a few blocks on Centre St. and you're in an old, quiet area that could be anywhere in Ontario. The arena itself is across the street from the Kraft Foods factory and has a tiny parking lot on-site, and it used to stand out in whitewash paint over stucco, with a high, arched roof. Since the arena closed the exterior has been repainted a sandy tan colour, but it was white in the OHL days. There was a big sign out front announcing its presence as the "Niagara Falls Memorial Arena".

Once inside, you entered a dark lobby with ticket booths and concessions directly in front of you. There was a plaque on the far wall announcing the building's opening on January 25, 1950, and another one indicating that renovations took place in 1986. There was also a portrait of the Queen. The other side of the lobby had a large display case featuring trophies and memorabilia from the Niagara Falls Canucks Junior B team as well as the old Flyers and Thunder. From the lobby you went upstairs into the seating bowl. Inside, there was a small score-clock and a huge number of banners hanging from the ceiling. Seats are all blue, all plastic, and I believe they dated from the 1986 renovation. The place is well-lit and there is a large silver cladding covering the ceiling. Views were excellent and the atmosphere seems like it would be decent as well.

The Niagara IceDogs played one game there in March of 2009 to commemorate the old barn, a fitting and terrific farewell gesture to one of the grand old arenas of Ontario. I didn't have the opportunity to get down to the game, which I regret to this day. But while the OHL game will most likely never again return to the Cataract City, at least the ancient, tumbledown barn got one final hurrah. 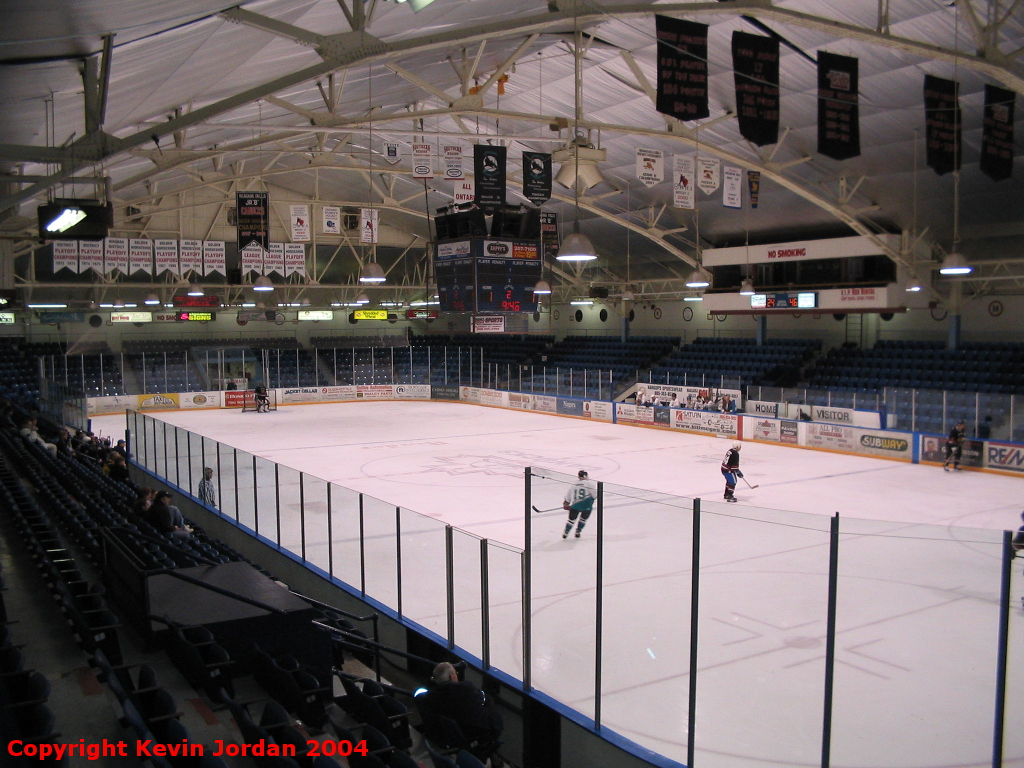 What's the Arena Used for Today?
After the OHL left in 1996, the Memorial Arena primarily hosted the junior B Canucks. When the Burke family bought the Mississauga IceDogs, they were considering both St. Catharines and Niagara Falls as potential destinations, but Niagara Falls at that point had already committed to building a new, junior B-sized four-ice pad (the Gale Centre), and city council was wholly uninterested in building another, OHL-sized arena in the city's boundaries. St. Catharines, on the other hand, leapt at the opportunity, which is why the IceDogs today play in St. Catharines and Niagara Falls is unlikely to ever have an OHL team again.

Memorial Arena ultimately closed in 2010 when the Gale Centre opened. As mentioned above, the IceDogs played one farewell game at the old barn in March 2009 before it shut permanently. For a time after the building hosted a sand castle exhibition, but once that ended the arena has sat vacant. A 2019 urban exploration YouTube video shows the arena in a state of advanced decay, likely occupied by squatters, but the building is still standing.