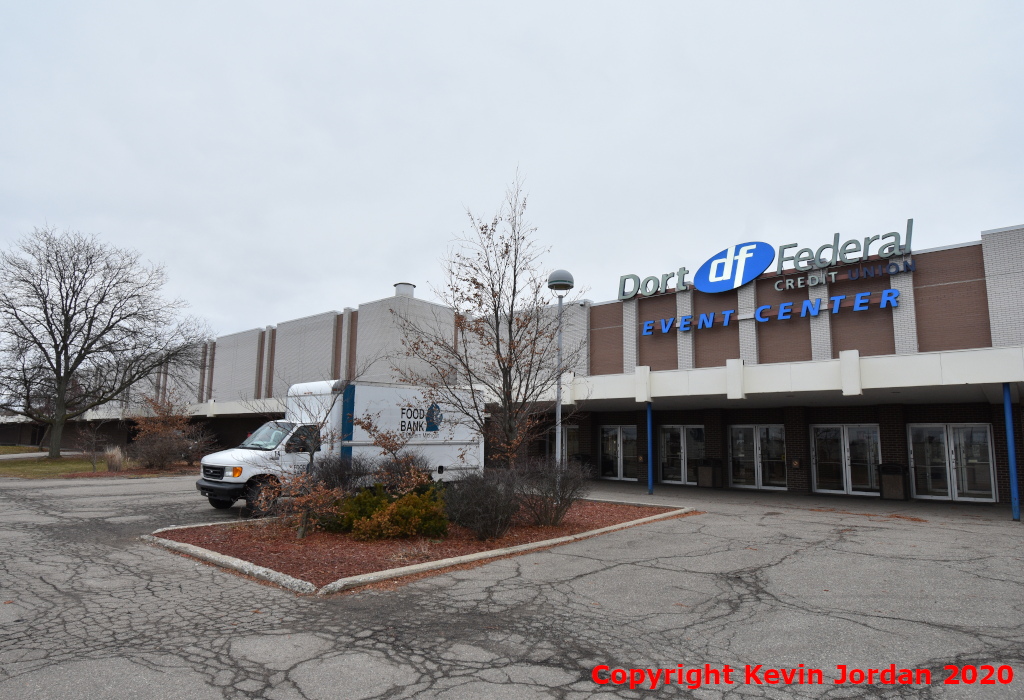 OK, so when the Plymouth Whalers announced in early 2015 they were moving to Flint, the hand-wringing started almost immediately. Yes, Flint has a certain negative reputation among people who've never been there, and even among those of us who have genuine affection for the city, it still doesn't quite bring to mind the glories of Renaissance Florence. When the tainted water crisis put the city back on the map for all of the wrong reasons in the middle of the Firebirds' first season, the chorus of negativity from the wags intensified. But the truth of the matter is that Flint, in spite of its perpetual economic depression, is a city with a fierce sense of pride and a long history of supporting their local hockey teams. With the moves over the past few years to fill vacant markets in the Niagara region, Hamilton and North Bay, Flint was always the best remaining bet for another OHL franchise. The players all live and attend school in the safe, boring suburbs, Flint had a built-in rivalry with Saginaw dating back decades, and the city has taken to supporting the local team well.

The former IMA Sports Arena was built in the 1960's and is located just on the Flint side of the boundary separating city from suburbs. It's easily visible from the interstate; a modernist gleaming white pile that has the unceremonious profile of a functional mid-century arena, surrounded by parking lots. On game nights the parking lot fills slowly and expensively, and a number of people appeared to be parking on city streets in the neighbourhood immediately to the south.

Mrs OHLAG and I stopped into the arena in 2009 en route to Saginaw just to have a look at the place, and what we found then was a dark, decrepit arena that was functionally unchanged from the 1960's. We're pleased to report now that the upgrades done over the summer of 2015 in anticipation of the Firebirds' arrival (which have continued in the years since) have done good work. The mid-century modern lobby, a wonderful place to congregate or meet friends before going into the game, now has a small team store in an alcove that's open on non-gamedays, and the old seats (at least in the upper level) have been replaced with new ones. To our great surprise, the lower bowl seats are all interlocking folding chairs! Otherwise, the place has been given a coat of paint to erase all traces of the Generals' navy and gold, a new video board has been installed, and the lighting has been upgraded.

The arena otherwise is unremarkable. The late 1960's design ethos of function over form lives in Flint, with one functional (if narrow) concourse around the top of the seating bowl, a few food stands and beer vendors, tiny bathrooms, and otherwise very little. The seats are very comfortable and have good views. In fact, "intimate" would be a good word to describe the building; the ceiling is low and reflects noise well, and the ceiling above the concourse is so low (and the views at the top of each section so narrow) that it's almost claustrophobic.

As far as game presentation goes, the video board's graphical presentation is solidly unremarkable, neither innovative and exciting nor stale and boring. The sound system is too loud for such a small arena, and the announcer's clear need to be the center of attention at all times would grate on me if I had season tickets. I'd also like to see a little bit more of Flint's hockey history on display - there are acres of bare white walls throughout the arena that could be used for photographs, loads of ceiling space for banners from the Generals and Tropics, etc. Even a few gallons of blue and orange paint would go a long way, and wouldn't at all be out of place in an older arena that dripped the navy and gold of the old Flint Generals when I visited in 2009.

Few cities have had a rougher go of it over the past thirty or so years than Flint. A one industry town that lost its one industry isn't that remarkable, particularly in a place like Michigan, but whether it be because of poor publicity, Roger & Me, gross municipal mismanagement, or the fact that it's an independent city rather than a suburb like Newark or Trenton, Flint has become the American poster child for post-industrial malaise and decline. And that's unfair. No, Flint isn't paradise. But it remains what it always has been on so many levels - a blue-collar town that loves its hockey, and that outside of the core is not much different from any other mid-sized American city.

I made my second trip back to Flint the first weekend of 2020 to find the Firebirds far more integrated and settled into their city than the first visit. Yes, the arena could still use a little more blue and orange, and yes, the sound system is too loud, but a nearly empty building in 2015 has been replaced by loud, passionate fans in 2020. Flint has taken to the OHL game, and attending a game there is a great experience. The hiccups of the first year of Rolf Nilsen's ownership were overcome, and with him now serving as a benevolent sugar daddy rather than a hands-on micromanager, the team now has the best of both worlds - solid hockey people running operations and a massive budget with pro-grade facilities to lure in recruits. The city has proven over the years that it will support hockey at any level, and with a built-in rival just up the road in Saginaw, one expects that the Firebirds will remain an entrenched part of the fabric of the OHL long in the future.


Inside the Dort Event Center 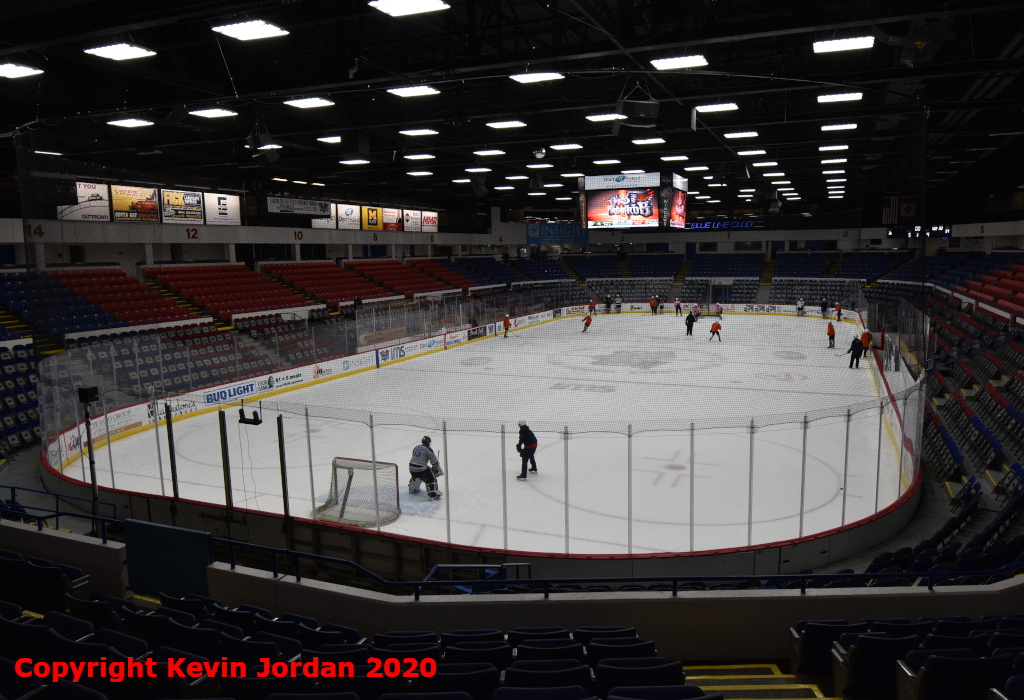 Future Developments
The Dort Event Center prior to the Firebirds' arrival was, to put it bluntly, a wreck. The team poured a lot of money into upgrades for the building in anticipation of their debut in 2015, most of which were behind the scenes - dressing rooms, ice-making equipment, etc. Rolf Nielsen's money has continued to upgrade the building since then, given that the team owns it outright, and facilities for the players are now among the best in the OHL.

The Firebirds purchased padded leather seats and arena ribbon boards from the closed Palace of Auburn Hills and installed them over the summer of 2020. The Firebirds' seat quality is now apparently among the best in junior hockey.


Franchise History
The Flint Firebirds began their existence as an expansion team in 1990-91 at Cobo Arena in downtown Detroit as the Detroit Ambassadors. Arena ownership decided that it was too expensive to maintain ice in Cobo, so for the team's second season they had relocated to Joe Louis Arena. The following year the junior team decided to attach themselves to the popularity of the resurgent Red Wings, and in 1992-93 the Ambassadors became the Junior Red Wings. This state of affairs lasted until the end of the 1994-95 season, when Red Wings owner Mike Illitch and Jr Wings owner Peter Karmanos began developing their well-publicised feud. Karmanos had tried to buy the Wings from Illitch, and eventually bought an NHL team of his own, the Hartford Whalers. The feud reached fever pitch as Illitch cast the OHL champion Jr Wings out of the Joe and into a state of homelessness. Karmanos immediately began planning to build his own arena in suburban Plymouth to be near his Compuware Corporation. The newly renamed Detroit Whalers spent 1995-96 essentially homeless, splitting their time between the massive Palace of Auburn Hills and the tiny Oak Park Ice Arena. In 1996-97 the Compuware Sports Arena opened, and in 1997-98 the Detroit Whalers were renamed for their new suburban home. After spending nearly twenty years playing to dwindling crowds in a terrible arena in the Detroit suburbs, Peter Karmanos finally had enough and sold the team to investors in Flint, who renamed the club the Firebirds.