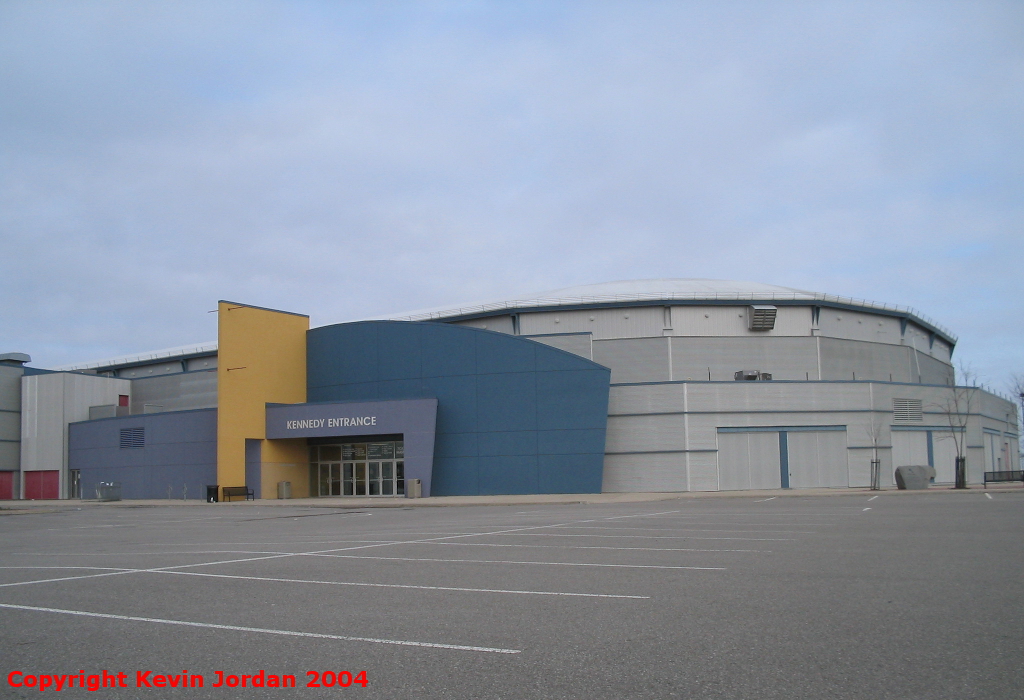 The OHL expanded to Mississauga and Brampton together in 1998, placing the closest two teams in the CHL a mere six kilometres apart on the same street. Unless the western frontier of the Greater Toronto Area held vast untapped reserves of junior hockey fans, the venture was doomed from the start. The Battalion's withdrawal in 2013, moving north to the old outpost of North Bay, was a confirmation that the league's "Toronto Strategy", comparable to the NHL's "Southern Strategy", was a dismal failure in most respects.

Back in 1997, the OHL was preparing to expand to Brampton, but with a sweetheart arena deal and money and publicity promised by the legendary Don Cherry, expansion was granted to Mississauga at the same time, and two new arenas went up a ten minute drive apart on the same street. Such was the OHL handicapped at the very beginning of its existence in Halton-Peel region. Instead of one community team with over a million people to advertise and cater towards, you had two - acting as rivals, hating each other, and competing for the attention of the same fickle, Leafs-loving suburban Torontonian fan.

So, the arenas were built and the new teams were minted, and what was then called the Brampton Centre for Sports and Entertainment was thrown up in a hurry to house the Battalion. Later renamed the Powerade Centre and now called the CAA Centre, it is a large building at the interchange of two highways, the 410 and the 407, and it is surrounded by parking lots and little else. There are the usual suburban big box stores in the neighbourhood if you're willing to drive, but within walking distance from the Centre itself there is only highway and undeveloped land.

From the outside the Powerade Centre looks like a hockey arena but is unusually clad in reflective steel, which makes the arena glow on a sunny day. The spectator bowl part of the arena is rounded like most new hockey rinks, but it also has a massive square attachment to its side.

That massive attachment, as we soon found out, is three other hockey rinks. The Powerade Centre doubles as a community arena and there are four ice surfaces in the building along with requisite dressing rooms and the like. The main part of the building, though, has two main entrances - one on each side - and entering the building feels like entering an older rink. The hallways are painted in a dark battleship grey like many old barns, and the "bunker" feeling of the building continues. The halls feature many kiosks and food stands, and the inadvertent retro atmosphere is obvious. There is also exposed concrete everywhere, just like in a real bunker. Apart from a large, well-stocked team store you wouldn't have much evidence so far that the Centre is so new.

The Bunker becomes a new building as soon as you enter the seating area. The seats are laid out in a "U" shape and every single one is a peevishly bright purple. Ugh. They're also narrow for a new building, and leg room, while great compared with some of the league, isn't fantastic for a newer building. In fact, perhaps the best word to describe the Powerade Centre would be "spartan". There are luxury boxes running down both sides of the building but many of them were usually empty on gamedays.

The views from the seats are universally good. The fourth side of the building, or the space at the top of the "U", features a restaurant, glassed in, at the top, and the "bleachers" at the bottom. The bleachers are about five rows of benches, much like at a ballpark, and apparently are set aside for the "rowdies". They also were the cheapest adult tickets in the OHL. Battalion logos were painted on the wall behind the bleachers, which was pretty cool to stare at all game. The music in Brampton was excellent, not too loud and very well-suited to my own musical tastes. Most of the music was 70's and 80's punk and new wave; I've never heard the Clash's "Train in Vain" at any other rink. The scoreboard was the last in the OHL not to feature a video screen. The building also is home to the Brampton Sports Hall of Fame, which is worth investigating in an intermission. There are the banners from the Battalion's successes over the years, as well as banners from the Bunker's other tenant, the Brampton Excelsiors lacrosse team.

The military theme of the team was done up to the hilt, in the same fashion as the team has continued doing in North Bay. The Battalion entered the ice from under a giant inflatable tank, and before the game, the sound system played battle sounds. The announcer, instead of announcing "last minute of play in the period", instead said "one minute until cease-fire". The mascot was "Sarge" and is a strange-looking soldier type. Finally, whenever the Battalion scored a goal, the sound system plays Edwin Starr's "War" which, frankly, is awesome. In general though, the military theme felt tacked on, and didn't really fit with the suburban locale and purple seats. The Battalion brand actually suits North Bay far better, given its massive Air Force base nearby.

Perhaps the worst feature at the Powerade Centre comes from the fact that it was thrown up in a hurry in a little-developed area. There is only one way to get to the building - by car - and while the Centre has a massive free parking lot, there are only two small entrances to the lot from Kennedy Road, which itself is only two lanes outside the building. As a result, traffic backups in Brampton were legendary, and even with the team's traditional small crowds, it can take anywhere from ten minutes to a half-hour to get out of the parking lot after the game. Unlike nearly every other sporting facility in Canada, leaving early to beat the rush in Brampton actually makes sense.

The Powerade Centre was a new building, but unlike most other new buildings, it seems that the city of Brampton was determined to come in under an already-low budget. Consequently, there aren't the facilities found in other new buildings (such as in Mississauga only ten minutes away). The Bunker, when full, had a decent atmosphere, as the sort of person who demanded that their rink have sushi and cheerleaders would go to the Hershey Centre. However, it wasn't full very often, and that, after fifteen years of banging their head against the wall, was the catalyst that finally led the team to uproot.

Whereas ten years ago the GTA had four OHL teams, today there are two - the Mississauga Steelheads in the west and the Oshawa Generals in the east. Two formerly unserved markets in North Bay and the Niagara region now have teams that are far stronger than the old markets. And while the Steelheads are still somewhat on life support, the Great Toronto Junior Hockey Clusterfuck is finally, finally, resolved after fifteen long years. While the small group of former Battalion diehards mourn the loss of their team, the league is in a far stronger place these days, with nineteen strong markets and one that just might get there if the former Battalion, IceDogs and Majors fans finally bury the hatchet and start supporting the one team they have left.

Inside the Powerade Centre

What's It Used for Today?
The Powerade Centre is today home of the Brampton Excelsiors lacrosse team. There is no major hockey tenant.


Inside the Powerade Centre 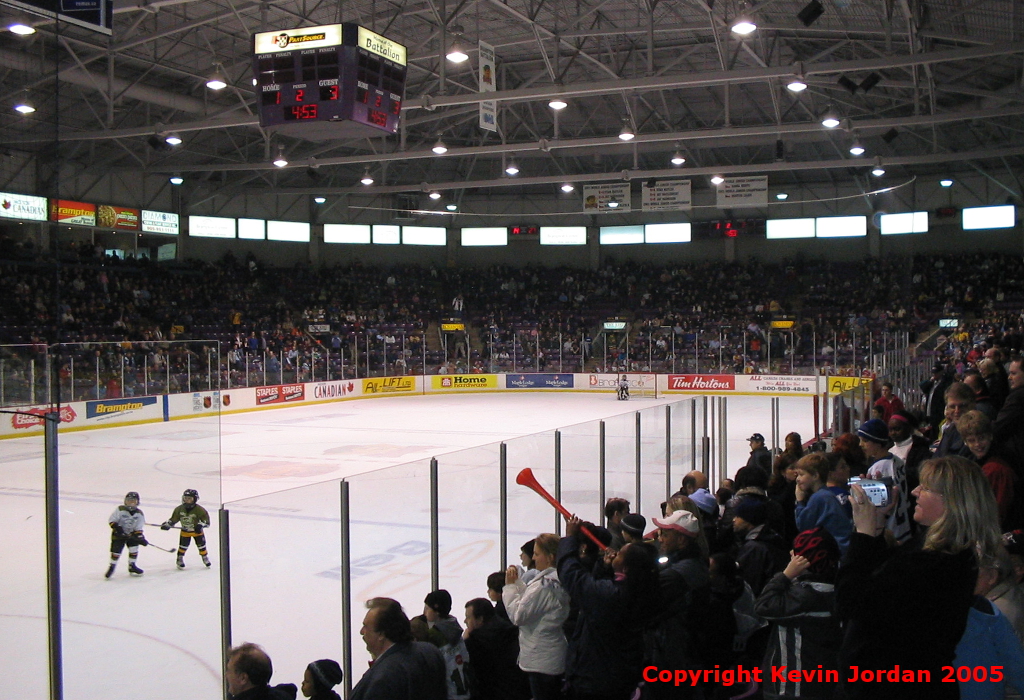