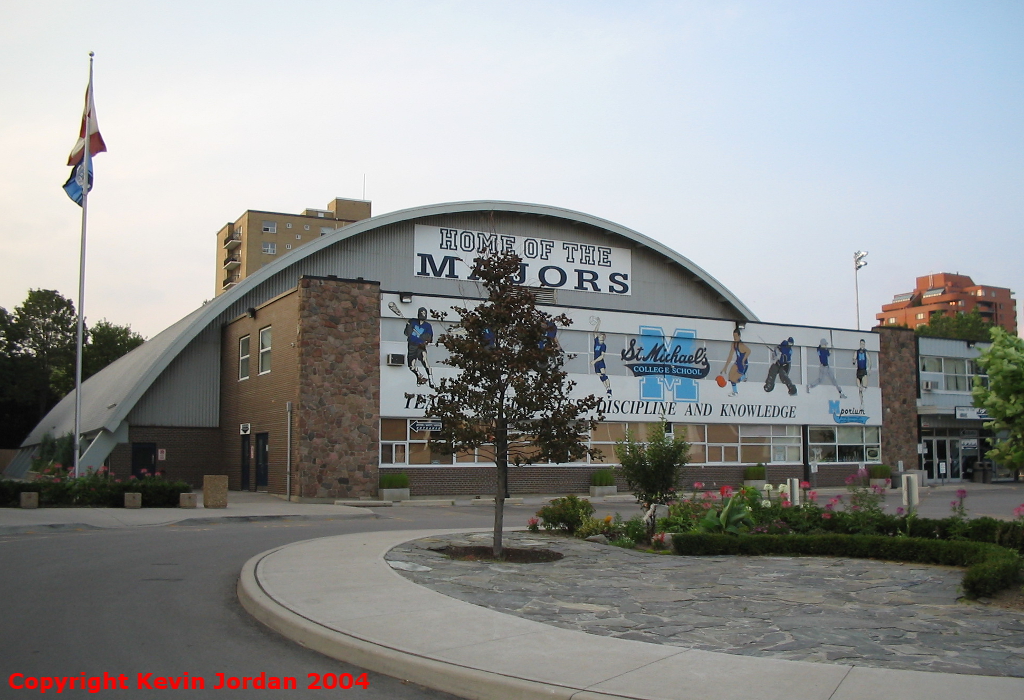 The St. Michael's Majors were granted a re-expansion team in the mid 1990's and signed a lease at Maple Leaf Gardens, playing there until they were evicted after the 1999-2000 season. The Majors were unable or unwilling to sign a lease at the new Air Canada Centre, the coliseum at the CNE that would later host the Toronto Marlies AHL team wasn't built yet, and there were no further options in the city of Toronto at which a junior hockey team could play. Out of options, the Majors signed a lease to actually move back to their namesake college campus. St. Michael's College Arena was and is a Junior "B"-sized arena, and Majors owner Eugene Melnyk tried in vain to find them another place to play for nearly a decade before finally buying out the Mississauga IceDogs' lease at the Hershey Centre in 2007 and moving out to the suburbs.

For the years the Majors played at the College Arena, it was a true throwback experience, getting to watch the OHL in a tiny, intimate bandbox of an arena where you could easily hear the players shouting on the ice. I loved it so much I tried to go every time the Knights played there on their annual visit. It was phenomenal to heckle and watch players try to keep a from laughing, or be able to sit behind the bench and hear the coach's instructions to players or the referee explaining a contested penalty.

The arena was built in 1956 on the campus of St. Michael's College (a private Catholic school) in northwestern Toronto, and originally was an outdoor rink! Eventually a roof was put on, and today it has a half-cylinder shape and is tiny from the outside and smaller from within. The facade is brick modernist and very 1950's. There is also a lovely mural at the front of the building showing several Majors playing various sports including hockey, and a large sign saying "Home of the Majors".

Once inside, you almost immediately are in the main portion of the rink, as there is no concourse to speak of. There are a mere six rows of bleachers on either side of the rink, and almost no seats at all in the ends. Above the ends is what looked like private boxes or a private lounge, glassed in. Above the bleachers on the sides is standing room. The Majors' tiny team store and box office were the only parts of the rink near the front door before entering the ice area. The team store, the "M-Porium", was great - it acts as a school outfitter in addition to its hockey focus, and as such it was probably the only team store in the CHL that sold ties and blazers. There is also a wood-panelled lounge and bar at one end of the rink which is even equipped with a fireplace! It's a nice touch and is an old-time hockey arena bar, not one of those new themed grills filled with overpriced disappointment. The lounge also includes some framed photos and such, one of which is a Majors advertisement which reads "These players don't fight because of the cameras. They fight because the other guy's an ass." Hilarious. There is a giant sign above one of the nets reading "St. Michael's College Arena" which is a very nice touch. The roof hovers high above the ice and an old, functional scoreboard keeps time. Washrooms are small, but they're adequate to the arena's needs. The arena has the smallest ice in the OHL, measuring at 180 X 80, or 20' shorter and 5' narrower than regulation.

Watching a game at the St. Mike's Arena was an interesting experience, and it was easy to forget you were watching the OHL, especially if you're used to Ottawa or London's rinks. Not only are you extremely close to the ice but you're at an angle that feels like you're hovering over it. Every heckle and shout is heard by everyone in the building. It would be very easy to lean over the glass and talk to the coaches if you were so inclined. You also have to watch for flying pucks in every location in the arena because you're so close to the ice. The view is incredible from every seat at the St. Mike's Arena.

The new incarnation of the St. Michael's Majors didn't make a huge amount of history in their years of existence, but the school is justifiably proud of the hockey players that have put on the blue "M" over the years. In the past, the Toronto Maple Leafs owned both the original Majors and the Toronto Marlboros as junior development teams. The Marlies were the home of the Leafs' Protestant prospects while the Catholic prospects played for the Majors, and as a result a friendly sectarian rivalry developed. Having the association with St. Michael's College was a bonus for a lot of Catholic parents, because each Major got a quality private Catholic education with tuition paid by the Leafs, so if the player didn't make the NHL, then he would have a private school education to fall back upon. Photographs of every St. Michael's graduate to play in the NHL still line the walls, covering an entire end of the building. Banners hang from the ceiling honouring the greatest of former Majors, including Frank Mahovlich, Tim Horton, Gerry Cheevers and Ted Lindsay. You can't ever forget the pedigree of St. Michael's history as a factory for top-quality hockey players.

St. Michael's College will always be remembered as a hockey factory that produced some of the greatest players who ever laced up the skates, but today, the league is better off for having consigned the tiny little bandbox to the history books. An unfortunate situation was allowed to blight the league for nearly a decade while a bunch of rich men fought over power, real estate, and slices of the pie. Now that the Majors have moved on to Mississauga and re-branded as the Steelheads, the Majors name has again been consigned to the history books. Meanwhile, with the IceDogs in St. Catharines, the GTA is finally no longer overrepresented. The league is better off for it. But still, if you want a great, old-school hockey experience, the Junior A St. Mike's Buzzers still play home games at the lyric little bandbox on Bathurst Street. 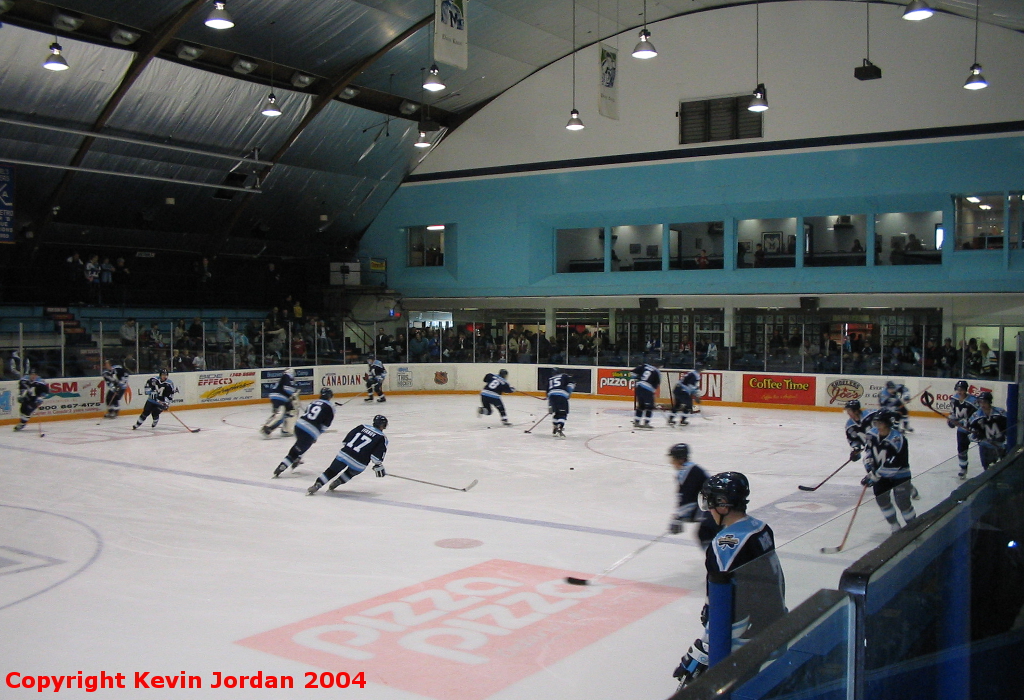 What's the Arena Used for Today?
St. Michael's College Arena is used today for minor hockey, and it is also home to the Junior A St. Michael's Buzzers. 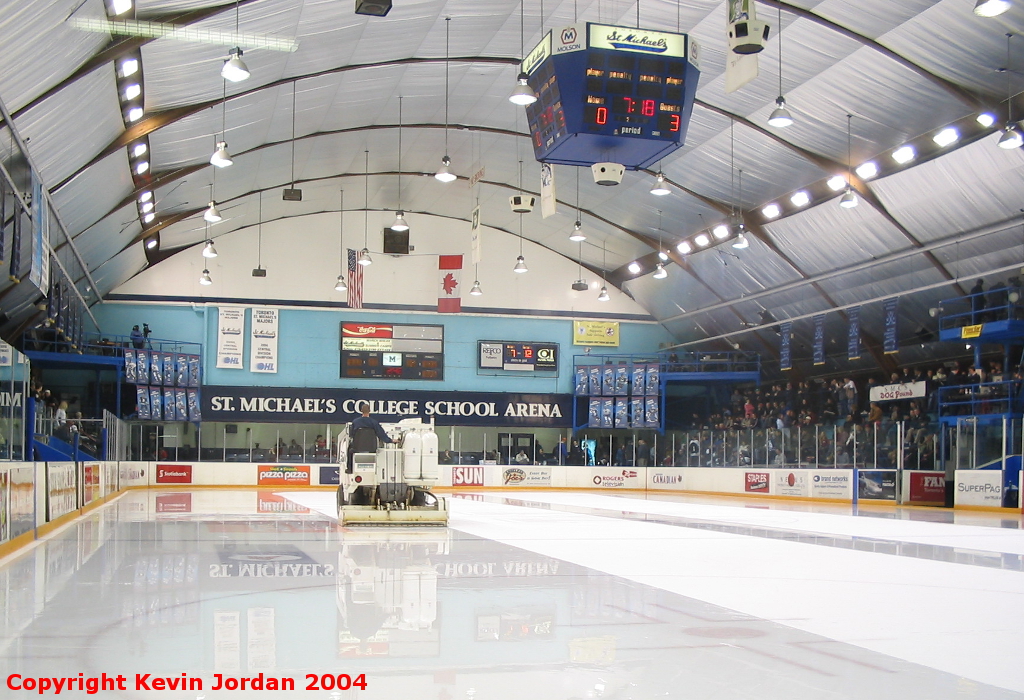