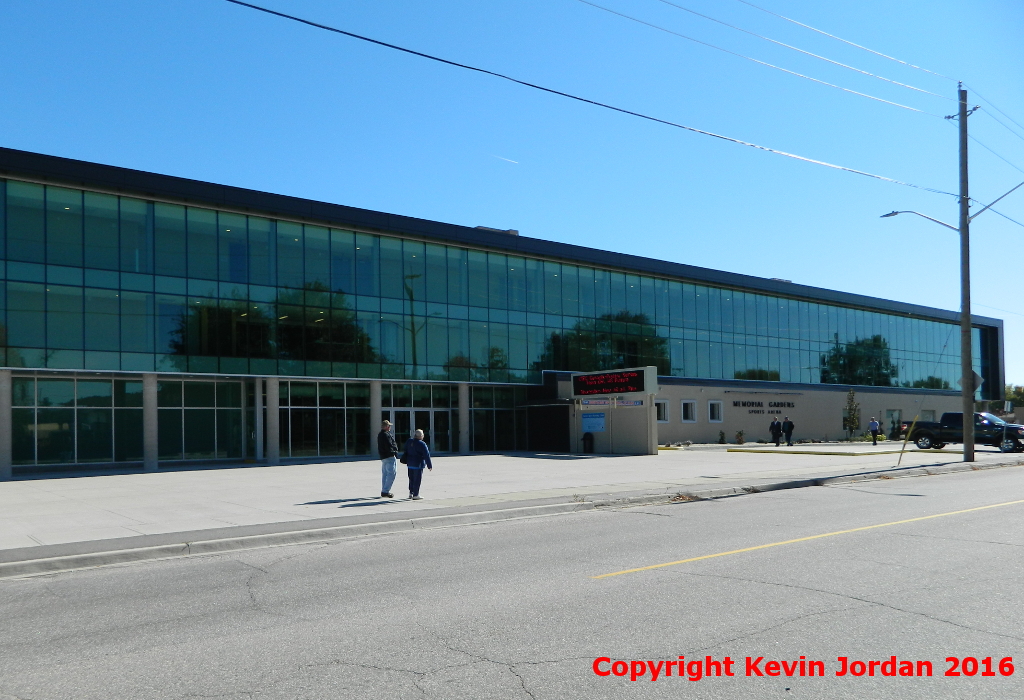 I first set foot in the North Bay Memorial Gardens early in 2004, only two years after the Centennials had departed. At the time, it really seemed as though the locals expected the Cents back any minute, with their banners still hanging at one end of the ice and pictures of former Cents to make the NHL dotting the walls of the concourse. And the arena, particularly by the standards of the OHL of 2004, wasn't in bad shape - it had been well-built in 1955 and properly maintained since, although it was small and without luxury suites or any of the amenities that the slowly corporatizing OHL was starting to demand. Yet in spite of the arena's good condition, I didn't really believe that a team would ever return - North Bay was too small, too northern, and too short on corporate dollars in a government and military town.

I've rarely been so happy to have been proven wrong! The OHL's return to North Bay in 2013 paralleled the NHL's return to Winnipeg. In both cases, a small, northern market with a passionate love for the game was abandoned because of high costs and low attendance. In both cases, the old team was passionately missed by the local diehards, but most neutral observers accepted the economic necessity of the team leaving under the circumstances that it did. And in both cases, changing circumstances meant that it made sense to return to the old market in triumph, and in such a way that warmed the hearts of even the most cynical of observers.

Oh, and in both cases, the return was an enormous success. The Battalion franchise left indifference and purple seats in the suburbs of Ontario's capital for a passionate fanbase that was crying out for high-level hockey again. Media indifference was traded for a media spotlight. The marketing department's flinging its head against the wall was exchanged for season ticket holder lineups the day the franchise's move was announced. And the team met with success in its first few years on the ice, making it to the OHL final in their first year on the ice and finishing well over .500 in the subsequent two years.

It took me four years, but I finally completed a bucket list goal that I never thought would happen, and went to an OHL game in North Bay in the fall of 2016. The North Bay Memorial Gardens, built in 1955, is located on a quiet residential street just outside downtown North Bay, and is also minutes away from Highway 11/17. It's in the middle of a community sportsplex which also has several baseball diamonds and soccer fields. The Gardens used to have gold bricks, gold aluminum siding, and a green tile front entrance that betrayed its 1950's origin, but the renovations have grafted a new glass and steel facade onto the building. I was quite pleased, however, to see that the futura sign on the front of the building has been kept.

Once inside, the ticket office and lobby are mostly unchanged from 1955, with yellow tiled walls, high ceilings, and concessions. Moving around isn't easy when the house is full. The arena was designed with a dual concourse system, with one under the seats and one running in front of them, with a "moat" separating the first row of seating from the ice. Originally, being seated in row A meant you were easily 10 feet back from the boards and eight feet in the air, which wouldn't have done much for the old arena's intimacy! The Battalion have installed two rows of rail seating right up against the glass, however, which is great for capacity but bad for traffic flow.

The first time I went to North Bay, the entire arena only had eight sections of seats - four massive blocks per side running the entire length of the ice, with a brick wall in one end and a large pink curtain hanging in the other. I couldn't resist Wizard of Oz-ing my way past the curtain, and was surprised to find that it only concealed the Zamboni garage, with a ton of wasted vertical space. Obviously, someone else had the same idea, because temporary seating has been installed in the former curtain end. The rest of the old wooden seats have been replaced with modern plastic ones, and the old press gondola, while still there, has been replaced with a new one in the glass addition to the building, taking up space formerly occupied by standing room at the back of one side of the ice. Luxury suites fill the rest of the old standing room area on the arena's west side, though there still is a big standing room section at the top of the east grandstand.

Game presentation is completely unchanged from the way things were in Brampton. Edwin Starr, Sarge, the "one minute to cease-fire" announcement, it's all still there. Teams often try to change their identity and make a fresh start in a new market, but Scott Abbott, owner of the Battalion since day 1, obviously designed his team the way he wanted and didn't want to change anything just because they were moving. It must be disconcerting for former Brampton fans to make their way north, sort of like seeing an old girlfriend happily cavorting with a new beau.

Once the game started, some other things became apparent. Moving around the building when it was even halfway full was a challenge, as part of the back concourse is closed off during games as an expansion of the visiting team's dressing room. I found it hard maneuvering around the building in the intermission even though the game wasn't close to sold out. Part of the arena expansion meant that there is now a new concourse behind the "brick wall" end of the arena, so at least that former bottleneck is eliminated, but it's still not easy. The expansion also means there is now a proper team store and a local sports Hall of Fame, and many more washrooms than before. I didn't see any lineups and the facilities were perfectly adequate.

The arena's ceiling is still low. While a new video board was installed in 2013, the structural steel of the rafters means that it's pretty much invisible to anyone sitting more than halfway up the grandstand. The team has provided televisions mounted on the overhang, but it still feels sort of like a waste. That said, the low ceilings mean that the crowd noise is intense, and reflected back onto the ice easily. In a league where the rinks are feeling more and more like cookie-cutters, inconveniently different is better, for me, than cloned ease of use.

The only real disappointment was that the old Centennials banners were nowhere in sight. I can understand why the Battalion may have wanted to have made a fresh start, but it would have been nice to see them hung in the North Bay Sports Hall of Fame, if nothing else.

Finally the Queen still gazes down on the ice surface just as she always used to, lending the place an old-school feel. The North Bay Memorial Gardens is not a run-down wreck like the old rink in Kingston was, nor is it updated and modern like most of the rest of the league. It feels, instead, like a Peterborough or a Kitchener - an older arena with character and charm but still built to take on the modern OHL. In a league where old barns are quickly becoming a thing of the past, North Bay's re-addition to the league is a big positive. One hopes that the Battalion will continue to find the success, profit, and passion in the Nipissing region that eluded them for fifteen years in Peel. 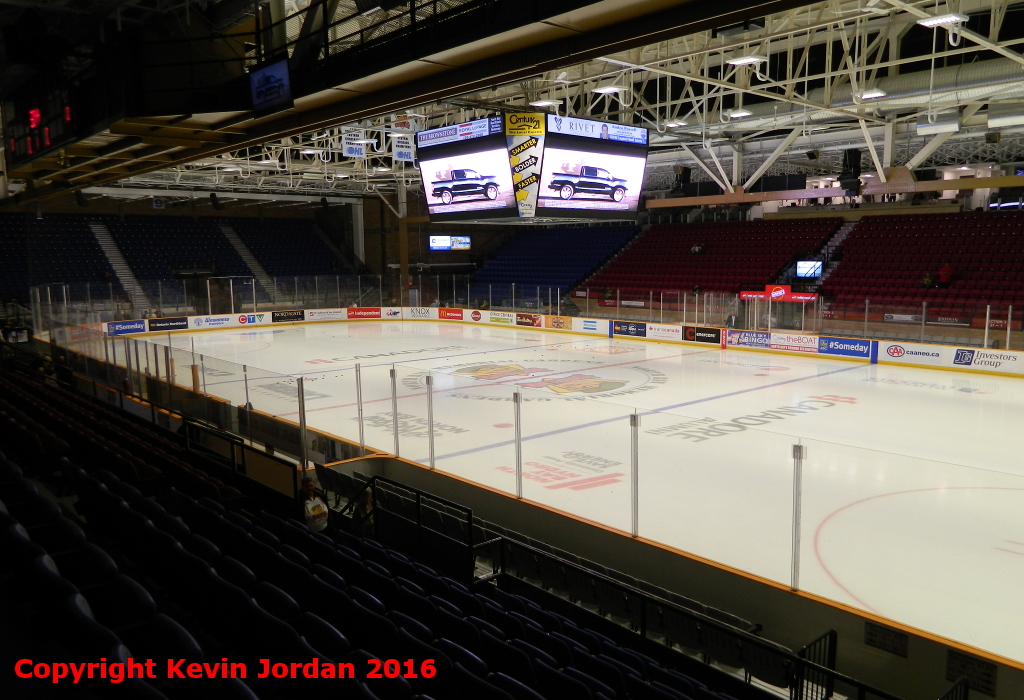 Future Developments
There are no plans to renovate or replace North Bay Memorial Gardens.


Franchise History
Brampton was added to the OHL in 1998-99 as an expansion team, owned by Scott Abbott of Trivial Pursuit fame. Abbott banged his head trying to convince Bramptonians to go to games at the Powerade Centre for fifteen years, but finally gave up and moved his team north in 2013. The Battalion's uniforms, history, and traditions all moved north with the team.