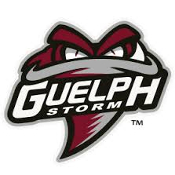 The Sleeman Centre was my first proper road game in 2002. (It was my third CHL venue owing to two trips to Majors games at Maple Leaf Gardens in 1999 and 2000, but those were to explore the Gardens, not because I cared deeply about the results of a Majors-Otters game.) With the London Gardens closed at the start of the 2002-03 season, and with the Knights starting the season on the road to allow construction to finish on their new arena, by the first weekend in October, myself and a bunch of message board posters on the NOOF missed hockey enough to meet up and carpool to see the Knights on the road. I'd had interest in hockey arenas by then, and I certainly had noticed the difference in atmosphere between watching the Buffalo Sabres at the old Aud versus the new Marine Midland Arena, but I had no way of knowing then that Sunday afternoon road trip would set the course of my future the way it would.

When I was a kid, I'd noticed visiting fans in London, but in those pre-Internet days, information about other teams was scarce, and I never really noticed much of a difference between visiting teams. They were The Bad Guys, the opponents which The Good Guys in Green and Gold would vanquish, and whether they were wearing black or blue or red never really mattered to me. But that afternoon, the Knights lost 5-4, and I got to experience the deeply novel experience of cheering goals for my team to near-silence, and to having thousands of people celebrating each time The Bad Guys scored. My first OHL roadie was soon in the books, and by the time I got home I was already daydreaming of the next one, and the next one after that, and to someday getting all 20 done.

Guelph was always an easy roadie with cheap tickets, and I went there so many times over the next several seasons that by 2009 I was swore I never needed to go back. Since then it's been a decade, somehow, since I've seen the Storm play a home game, and I'm just now starting to get the hankering to make the hour and twenty minute drive down the 401 to see them again. My review therefore is going to be out of date, but regardless of anything else, the Sleeman Centre always will have a space close to my heart, because it was my first time on the road.

Guelph's Memorial Gardens was the first time a classic OHL arena closed, in 2000. Because of this, it was the only OHL classic rink at which I never got to see a game. The Sleeman Centre opened in 2000 in a space previously occupied by a downtown Eaton's department store, and this rebuilding influences the site and layout of the arena. The main entrance is actually located in a downtown mall, and while there is an exterior door fronting the street, there is no bowl access from that door; only a corridor that leads to the mall concourse entrance. When I was last there, a part of the mall food court was still accessible during games from the arena concourse, which meant that if you really had a hankering for mediocre mall Chinese food while watching hockey, you could have that! I'm told, sadly, that the mall food court space was finally lost a few years ago and was converted to unrelated office space, which is less hilariously random but certainly more useful.

The arena bowl is generic OHL clone rink, reminiscent of the buildings in Sarnia, Sault, Kingston, Niagara, Mississauga... I'm told there's a video scoreboard now like every rink has, but otherwise I'm sure it's not changed much since my last visit. There is an open concourse running around the top of the building. There is nothing to obstruct your view while on the concourse, so you can run for a beer or a hot dog without missing any of the game. There are souvenir kiosks and a multitude of food stands, which lend a "carnival" type of atmosphere to the building - all they need is a guy with a ring toss game and Storm kewpie dolls and they'd be all set. The seats are all blue and modern plastic comfortable. Views are all fine. The sound system is good - clear and precise without being overpowering. The arena announcer is relatively faceless - not old-fashioned but not annoying either. Washrooms are clean.

There is a second level of the building with private boxes that run in a "U" shape around the top of the building. On the fourth side is what looks like a standing-room section, although it apparently is never used. One guy I talked to said that the only time he's ever seen it used was for the overflow of press when Guelph hosted the 2002 Memorial Cup. The Storm's deranged mascot Spyke dances up in that area as well at one point during every third period. He always seems annoyed when the puck drops again and attention turns away from his capering. Spyke is easily the strangest mascot in the OHL - he has frightful hair shooting out the back of him and glowing red eyes. I'm honestly surprised that he doesn't frighten children.

I've never really had issues with Guelph fans - the atmosphere in the building is decently-loud but also pretty pleasant, and there are usually a fair number of families in the seats. Guelph fans have a reputation for complaining when it comes to the performance of the referees. Some of it is deserved, but I haven't observed too much that's over the top in the Sleeman Centre.

The Sleeman Centre, all in all, is one of the league's better buildings. It's located right downtown where all good arenas belong. It's a good place to see a game. Of the new generation of OHL clone rinks, I'd rate it highly. It may be the home of a divisional rival, and one with a stupid team name and gaudy logo, but you never forget your first time, and my first time was at the Sleeman Centre. Sometime soon I'd like to go back again. I'm sure little has changed in the past decade, but I'll always have good memories there.

Inside the Sleeman Centre 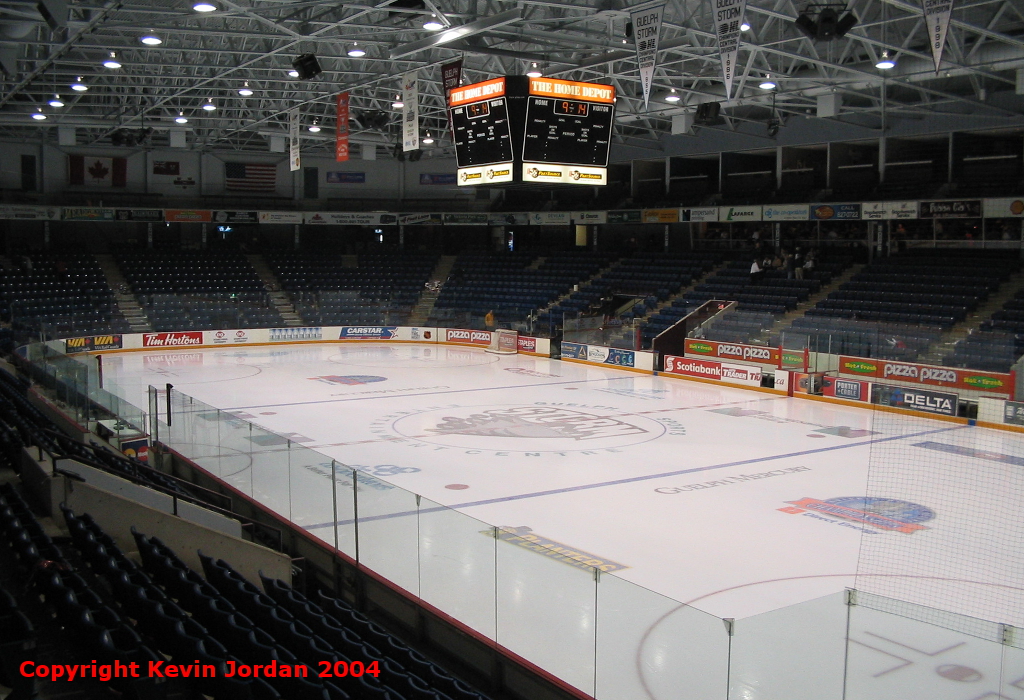 Future Developments
There are no plans to renovate or replace the Sleeman Centre.


Franchise History
The Guelph Storm are the current incarnation of the team once known as the Toronto Marlboros. The Marlies got their start in 1934-35 as the Protestant junior club affiliated with the Maple Leafs, to rival to the Catholic Majors. The Marlboros were owned for generations by the Leaf ownership, starting with the Smythe family and continuing on through the Harold Ballard era. When Ballard died in 1990, the first thing the new owners did was to sell the money-losing Marlboros to Hamilton, where they became the Dukes. That lasted only two disastrous seasons, though, and in the end the Dukes were sold yet again to Guelph for 1991-92, where they became the Storm. They played out of the Memorial Gardens until the 2000-01 season, at which point they moved into the new Sleeman Centre.

Paul was a young man who tragically died as a result of injuries sustained in playing in a Junior B game at the Guelph Memorial Gardens in 1972. No player for any Guelph team has worn #18 since Paul's death. Click here to read an article from 1972 about Paul's funeral, or here to see the picture of Paul that hangs on the wall of the Sleeman Centre.