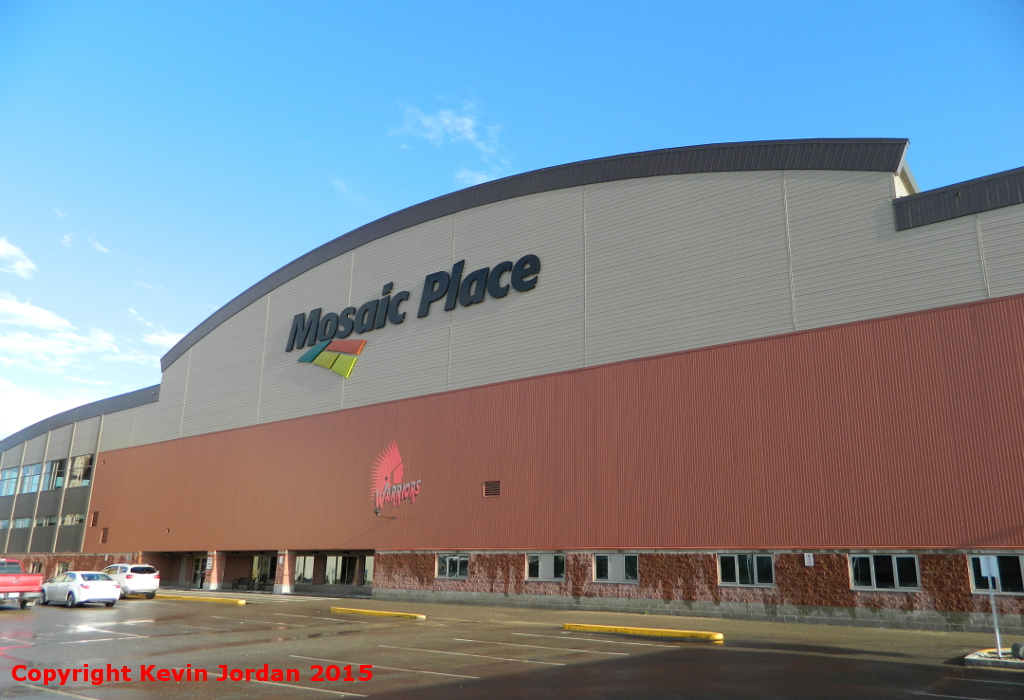 The Moose Jaw Civic Centre was an icon. The one junior arena that every hockey fan in Canada could name, the famous "Crushed Can", designed by Joseph Pettick and built in 1959, was to my knowledge the only hockey arena in Canada that ever won a recognized architectural award, the Massey Medal. It was an icon of modernism, and when it was demolished in 2012, there was loud and angry outcry from the preservationist and architecture communities.

While the Civic Centre was justifiably famous, I can understand how local hockey fans would have grown tired of a building that was too small for modern use. No video board was possible owing to the low ceiling, and the sloping roof was so severe that it wasn't possible to see the fans on the other side of the ice. Mosaic Place was built in downtown Moose Jaw as a replacement, opening in 2011, and in many ways it is the anti-Civic Centre. The new rink is cavernous instead of intimate, downtown instead of suburban, and conventional instead of ground-breaking.

When approaching Mosaic Place by car, you can see it from a long ways out. The arena actually has a curling ice pad on the ground floor, which means that the arena floor is elevated multiple storeys above street level. As a result of this and the high ceiling, Mosaic Place dominates its city block, and fills the space completely like Kingston's downtown arena in the OHL. The building's architecture is fortress-like. All four sides are covered in blank, empty parged walls, unbroken by any ornamentation or features except for occasional entry doors and emergency exit stairwells leading down to the street.

"Downtown versus suburbs" is a common debate when building any new arena. Availability of nightlife and restaurants versus availability of parking. Ease of access by transit versus ease of access by car. Moose Jaw elected to build a downtown arena, but the architect then designed a building that would fit perfectly in the suburbs. The huge areas of dead frontage and dominant, muscular design would work just fine sitting in a windswept parking lot out on the prairie by the Trans-Canada Highway, but in a downtown setting the arena is out of scale and sync with the surrounding area.

Once inside Mosaic Place, the curling rink and team store are on ground level, or you can take a massive stairway, reminiscent of the huge stairs that led into the Joe Louis Arena in Detroit, up into the arena bowl. The team store is well-stocked with interesting team merchandise, but oddly, the store is on ground level and inaccessible from the ticketed area on gamedays. There is a single small merch table on the concourse upstairs, but it seems like a missed opportunity to me to have the store so unavailable to the wallets of patrons during the intermissions, and particularly so when the team store has so much more stuff available.

The first view of Mosaic Place from the concourse upstairs is damned impressive. The ceiling is as high as the Crushed Can's was low, and it is difficult to believe in looking at the arena that it only holds 4,500. A J-shaped ring of suites hangs over the concourse, which goes all the way around and allows terrific views of the ice surface from all angles. A massive Mosaic Place sign and giant home and away team jerseys hang in one end. Apart from the Avenir Centre in Moncton, I can't remember the last time I was so impressed with the first interior view of a new CHL arena.

The building has all of the trappings of a new arena that you'd expect - wide concourses, large washrooms, comfortable red seats with ample leg room and decent views of the ice. None of it is anything to write home about, but as a facility stripped of context, Mosaic Place is top tier.

Where Mosaic Place's quality starts to falter is in the game presentation. The Warriors are a community-owned team, and the building is owned and operated by the municipality. The Booster Club, a regular presence in many CHL cities, is far more integrated into the team than in most places, such that they actually have a permanent window in the concourse comparable to the guest services booth in most CHL cities, and their operations help to fund the team year-by-year. In the corporate age of hockey and widespread facilities management companies, ordinarily I would find that endearing, but there are definite annoyances that can and should be fixed.

Sitting along the side in row 5, there were two arena spotlights trained directly on our seats for the entire game. Perhaps as a result of this, the ice surface is shockingly poorly-lit for a new arena, with light and dark spots all over the ice. It's not that the lights themselves are at fault; it's that they are not properly calibrated. Meanwhile, the concourse is dark, as dark as Windsor Arena or the Kingston Memorial Centre was. The condiment station at one concession was so much in shadow that a Wal-Mart issue desk lamp was attached to illuminate them, so that you could tell the ketchup and mustard apart! In an old arena that may have power supply issues, this would be forgivable, but in a new building it is very hard to understand.

The Warriors' AV presentation is also poor for a new arena. The video board is standard-definition and pixelated - not up to the standard you'd expect for one of the CHL's newest arenas. Music volume is perfect - neither too loud nor too quiet - but whoever is running the sound system apparently never got the memo that, like in a game of musical chairs, the music is supposed to stop to signal action. While the music overran into play on every stoppage, the longest one I kept count for was eleven full seconds of game action that elapsed at one point while the music was still playing. In talking to locals, this was apparently not an isolated incident, but a normal thing dating back to the Crushed Can days. It's surprising to me that the league hasn't stepped in to order them to knock it off.

Ushers and security are also few and far between. While the fans were pretty quiet considering I saw a game against the Warriors' archrivals from Regina, I only counted five sections with posted ushers. A lady a few seats over from us got hit with a puck at one point in the game, and no usher, security or medical staff came to check on her condition (she appeared to be fine, but the building really should make sure of that).

I left Moose Jaw mulling over the building's contradictions. It is a downtown arena that would be more at home in the suburbs. It is a new arena that behaves as an old one. The lighting and presentation issues would range from mildly endearing to moderately forgivable in an old, community-owned building, but in a new arena as nice as Mosaic Place is (at least on the inside), they just seem out of character. Moose Jaw is the only new arena in the CHL I've been to where the gameday operations are from a bygone era of hockey, before every moment of the game was monetized. If the Warriors fixed the lighting and audiovisual issues in their rink - and those issues are absolutely fixable - I think I would have enjoyed a game there a lot more. As things are, though, a Moose Jaw Warriors game is a true Mom n' Pop operation taking place in a building that sets its expectations as anything but that. One hopes that someday the Warriors will professionalize their operations a little bit, while still retaining the small town charm. 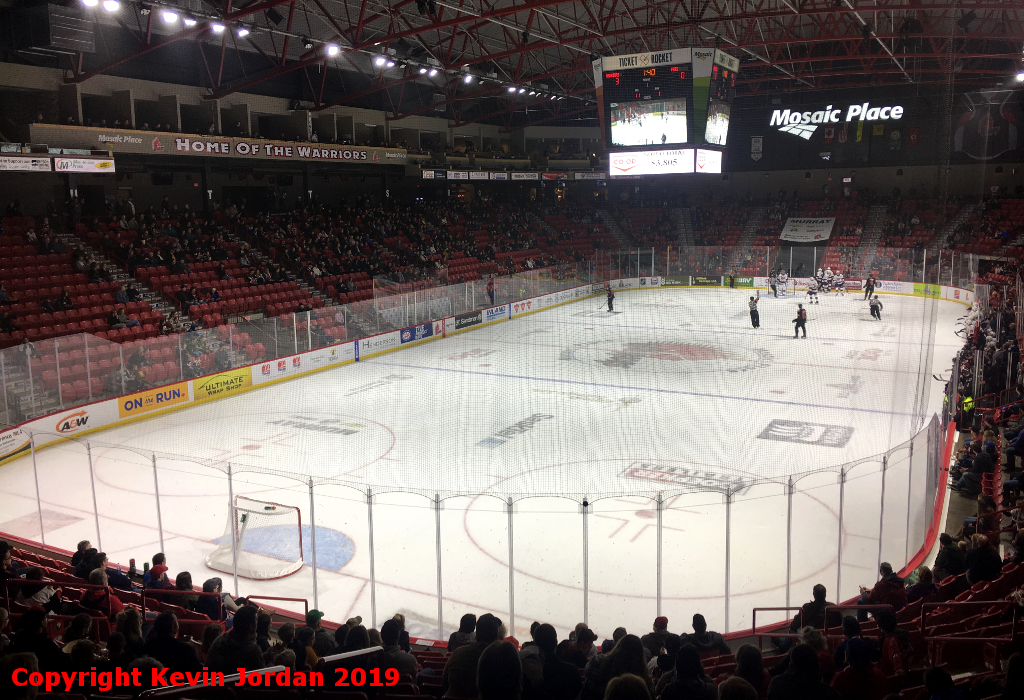 Future Developments
There are no plans to renovate or replace Mosaic Place.


Franchise History
The Warriors were founded in 1980 in Winnipeg, named for an old Winnipeg Warriors minor pro team that had existed in the 1950's and 1960's. Winnipeg's original WHL team had left for Calgary in 1977, and the Warriors were an attempt to rekindle Winnipeg's love of junior hockey. Unfortunately, the Warriors were awful their first few years at Winnipeg Arena, and hemmorhaged money playing to sparse crowds, unable to compete with the allure of the NHL Jets. After four seasons the Warriors decamped for Moose Jaw, replacing the SJHL's Moose Jaw Canucks. They played at the legendary Moose Jaw Civic Centre until 2011.