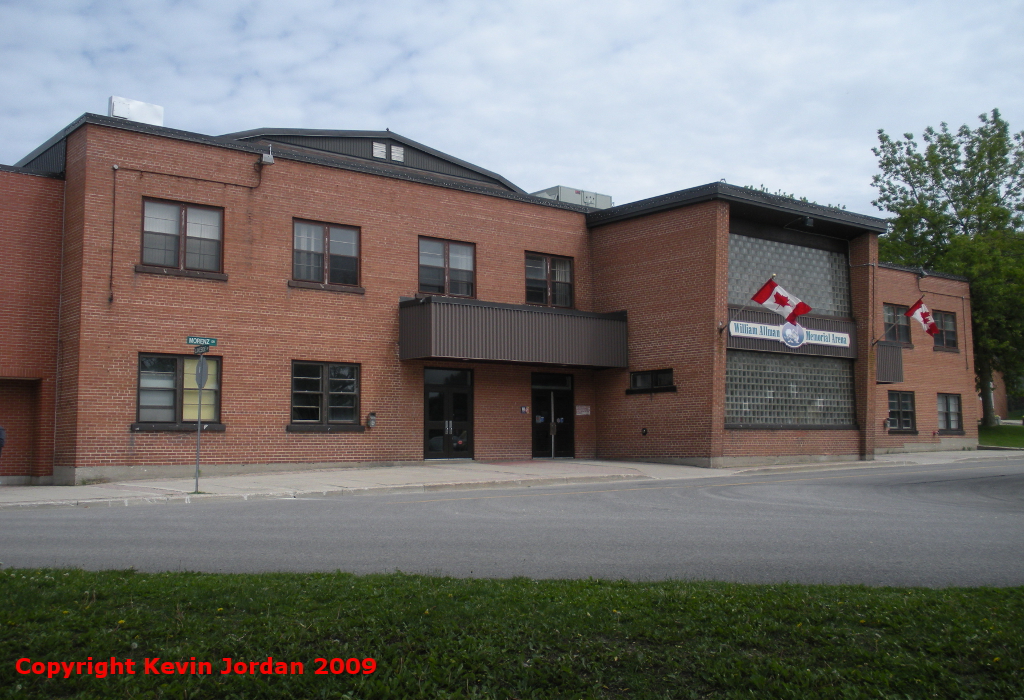 Note: I have not been able to find any information about the logo or colours of the Stratford Kroehlers. Information about the formative days of the OHA is exceptionally hard to find, as records were not well-kept at all back then. The logo and colours seen here belong to the Kroehler furniture company, who were the team's sponsor. Please email me if you have any new information.

When I first visited William Allman Memorial Arena in early 2004, I fell in love with the building, and it remains to this day my favourite hockey arena in Ontario. It is a perfectly-preserved relic of a bygone age, with steep seating, a high roof, and immaculate maintenance that keeps it feeling young. However, in spite of my research into the early years of the OHL, I never dreamed that the arena had once been used by a major junior team. While information about the early years of junior hockey in Canada is nearly impossible to find, it seems that there was a team in Stratford, the Stratford Kroehlers, who played up until 1951, and therefore, the Allman Arena can finally have a full page on this guide.

What was then known as Stratford Arena sits on a tiny plot of land in the heart of downtown Stratford, a stone's throw away from the Avon River. It is constructed of brown brick and has a new front facade that belies the building's advanced age. The new facade also includes a new ticket office, and once you enter through the heavy main doors you find yourself in a large lobby filled to capacity with photographs, trophies, and other hockey flotsam and jetsam collected over eighty years. The lobby has its own set of heavy doors that lead into a narrow corridor underneath the seating area that is so small that an adult has to duck in order not to bump his head on the support columns. Fortunately, fans are not subjected to this treatment on game-day, as there are also a pair of staircases that lead up into a top concourse.

The first view of the ice in Stratford is breathtaking. The arena glows brightly with colours. Bright red and blue wooden seats surround the ice surface, polished dark hardwood floors ring the seating area, and most of the bricks and steel are painted in a whitewash. Signage is painted in bright yellow and black directly onto the brick outer walls. Banners and signs hang from the ceiling. The scoreclock is relatively new and functional. The roof sits high above in an arch. The place is somewhat reminiscent of Windsor Arena, which was built in the same year, except that Allman has been properly taken care of over the years while Windsor has been allowed to rot.

While the OHA has not called Stratford home for more than half a century, the old arena still stands proudly. I believe it is Ontario's finest old arena, and attending a junior B game in Stratford allows any fan to steep in the tradition of the formative days of junior hockey in Ontario. 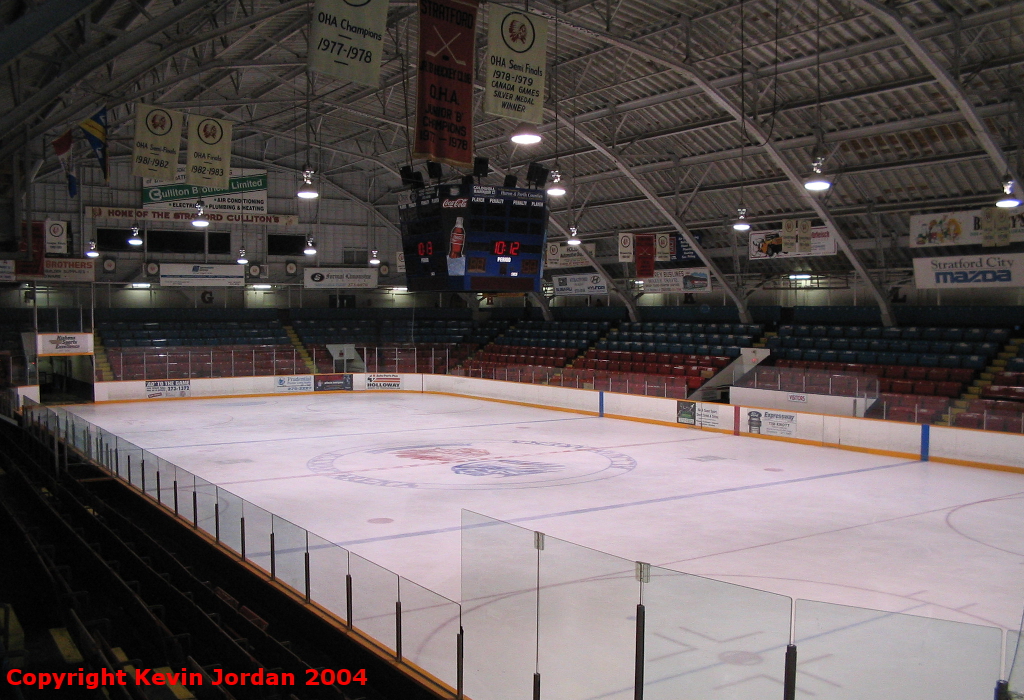 What's the Arena Used for Today?
Stratford Arena was renamed in 1996 to William Allman Memorial Arena, in honour of the long-time building manager. The arena was used for OHA hockey way back in the formative days of the league, but there has not been major junior team located in the Festival City for over fifty years now. The arena is still in great shape, considering its age, and is used by one of the most successful junior B franchises in Canada, the Stratford Warriors. The arena has also been used by many film and television crews as a stand-in for an old-time hockey rink, most notably in Bauer's "Leave an Impression" series of ads.