You have to really want to be in Peterborough to find yourself there. The city is one of the few in southern Ontario that's not really on the way to anywhere else, and most people would never go there unless they had a reason to be there. But in spite of that, most people across Canada have heard of Peterborough, and usually this is because of the Peterborough Petes Hockey Club. The Petes define Peterborough in a way that few other CHL teams ever have, having produced more NHLers than any other junior team and being the most successful OHL team since the Second World War.

The Peterborough Memorial Centre is an oblong building located just south of Peterborough's compact, lively downtown. It's built in a residential neighbourhood with a large football field just across "Roger Neilson Way", a street named for the legendary former Petes coach. The building also has a sizable parking lot on site, with more parking in the neighbouring fairgrounds. The design of the building is definitely odd; it's built with a large overhang that almost reaches Landsdowne Street constructed over a new atrium that was built when the Memorial Centre was renovated a few seasons ago. A large marquee reads "Peterborough Memorial Centre" and the rest of the building is mainly done either in brown brick or aluminum siding.

Once inside the Centre you find yourself in front of the ticket windows in a largish lobby. The Petes have a well-stocked team store to the right of the main entrance. The lobby has a high ceiling and there are concessions located behind the ticket windows once you enter the arena proper. The city of Peterborough also maintains the Peterborough Sports Hall of Fame in the arena, and while a "Hall of Fame" in most OHL cities entails a few portraits on the wall or something similar, in Peterborough they have a full-sized museum. There are artifacts dating back throughout Peterborough sports history in all sports. The Petes' long and proud history is prominently featured, of course, but there are also relics of everything from lacrosse to lawn darts. It's the OHL's finest museum and is well-worth arriving early to see properly.

From the main lobby you have to walk up a few stairs to reach the arena - the ice isn't built at or below ground level, but a few feet above it. When you first see the bowl of the Memorial Centre the sight takes your breath away. Banners hang prominently from the ceiling and a gigantic portrait of Her Majesty the Queen smiles down from the far end of the ice. The ice is actually raised on a “stage” from ground level, which means that anyone in standing room winds up looking up at the players, just contributing to the sense of the sportsmen being performers. The arena is not laid out along sides like nearly every other hockey arena, but instead is laid out end-to-end. There are only about ten rows of seats on either side of the ice, with private suites behind the seating. One side of the ice is club seats and there is also a sizable press box. In one end there is a huge "gallery" section which extends back a full twenty-six rows, all the way to row Z.

The fourth side of the building has no seating at all, but instead has a stack of private suites and a sports bar. The scoreclock in Peterborough is new and eight-sided, with full video screens on four sides and standard timers on four sides. It is used professionally to great effect. The seats are all new as well and coloured - what else? - maroon. Washrooms are fine. The sound system is all new and sounds terrific.

Peterborough's Memorial Centre is notorious for its square corners; they're unlike any you've ever seen before. In fact, the Zamboni can't get directly into the corners to clean the ice, and as a result the corners tend to get rutted easily. The Petes practise bouncing pucks off the corners to learn their odd bounces, and at least one game has been won by knowing how to work the corners.

I was prepared to love the Memorial Centre unconditionally, but the flaws in Peterborough begin to show themselves as the game gets underway. First, the concourse section extends only from the main lobby to about halfway down the sides, and so if your seat is in the far end of the building you are expected to get there via a narrow hallway right down by the glass. Traffic bottlenecks easily, and would block the view of anyone seated down in those sections. In addition, the Petes turn the arena lights off in every intermission, which made the taking of decent photographs very difficult. I later learned this is a tradition dating back to the days before the renovation of the PMC, when the staff shut the lights off to keep the building cool. Killing the lights is no longer necessary since air conditioning was installed, but they still do it anyway. In addition, Peterborough is as "promotion-heavy" as any OHL building I've been to. Their promotions girl's voice is nails on a chalkboard, and it's a shame for a team as historic as the Petes to play in an atmosphere where they seem like the sideshow at times. Finally, while the arena sound system is terrific, the music selection is mainly techno and club music, which doesn't really fit the atmosphere of such a historic team.

Peterborough's hockey team is connected to the city like few others in Canada. The "mighty maroon and white" is a religion in such a small, out of the way city as Peterborough is. The team is blessed with rabid fans who give the arena a wonderful atmosphere, and Peterborough's renovated Memorial Centre is updated enough to have modern amenities while still having interesting architecture and solid atmosphere. Much like in Kitchener, Peterborough combines a proud historic building with modern renovations to give a building with the amenities of a new building and the soul of an old one. Peterborough's flaws - the promotions, lighting and lack of a full concourse - are small, but unfortunately, they really stand out in a place that is so close to being perfect. 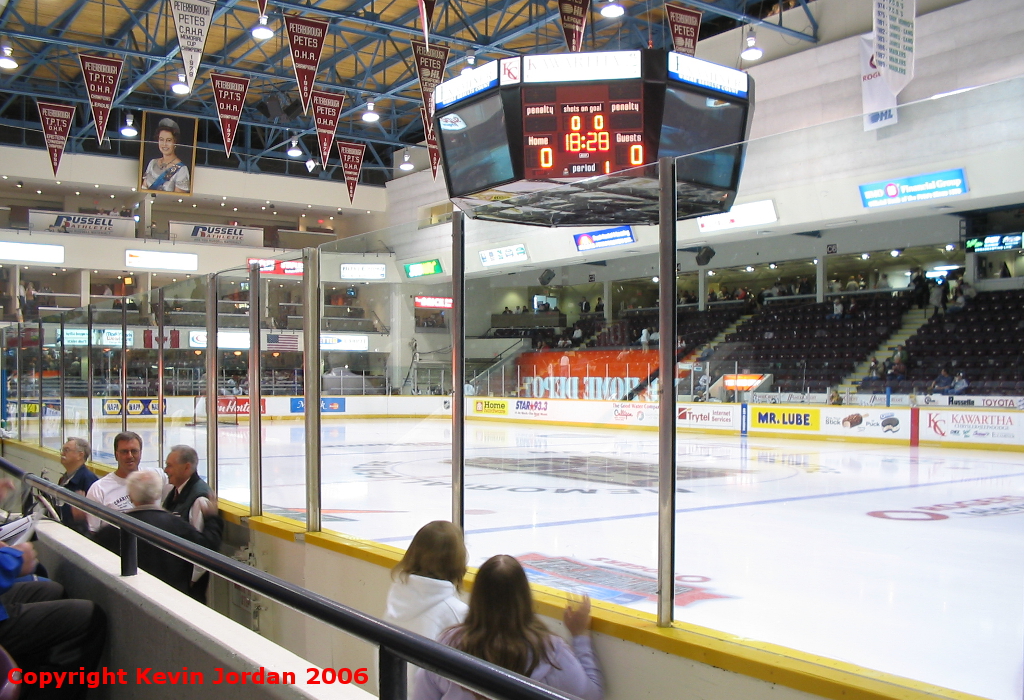 Future Developments
The Peterborough Memorial Centre's days are numbered as of 2019 - the city council voted in January of that year to build a new arena to replace the aging facility. No timeframe has been set as of yet. The replacement is probably needed, given that the Memorial Centre is too small to meet the needs of the modern OHL, but it will still be a shame when it goes.


Franchise History
The Peterborough Petes began in Kitchener as the Canucks and the Greenshirts, but moved to Peterborough in 1956-57. Their original name in Peterborough was the TPT's, which came from the team's sponsor, the Toronto-Peterborough Transit Company Ltd.


Retired Numbers
The Petes have not retired any numbers, but they have banners hanging from the ceiling honouring past Petes players and coaches including Bob Gainey, Larry Murphy, Scotty Bowman and Roger Neilson. 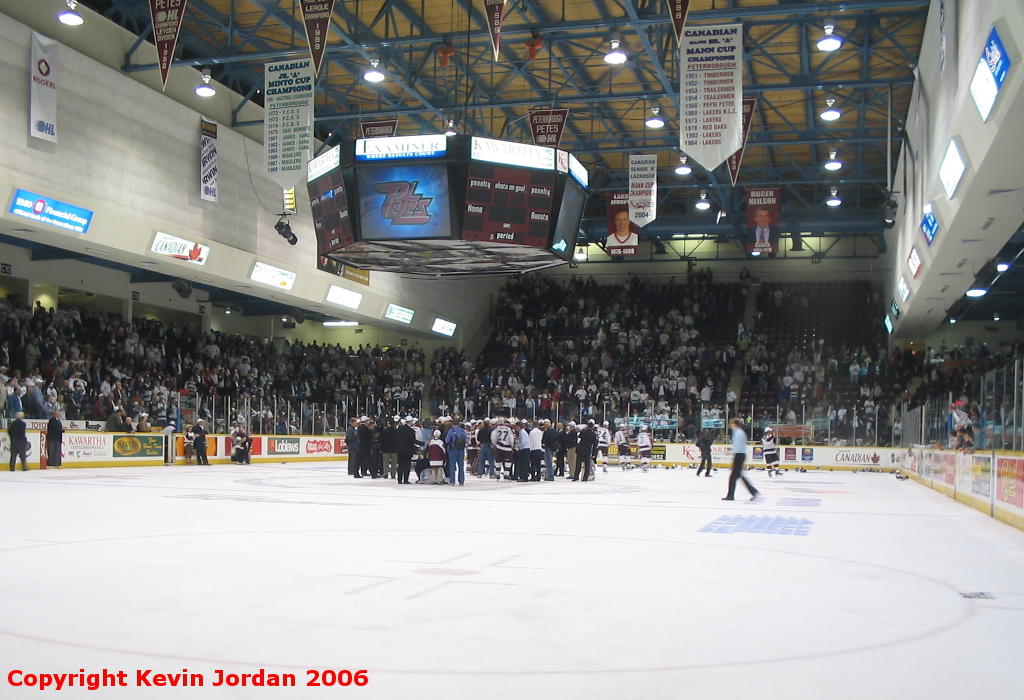