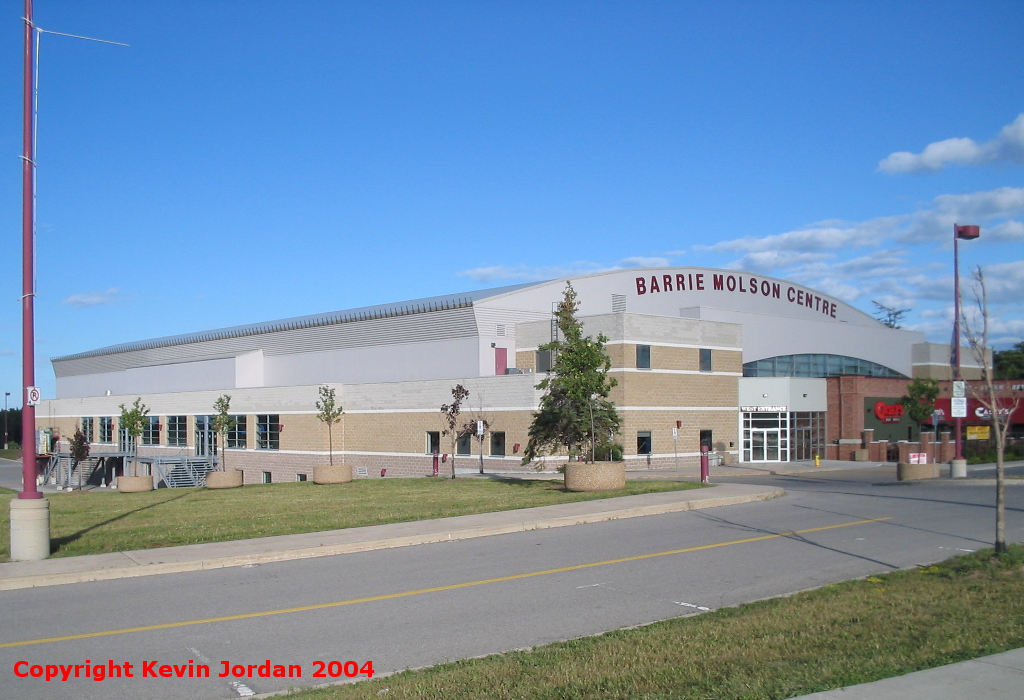 Junior hockey arena connoisseurs talk about "clone rinks" a lot. Of the arenas I've been to, I would say that there's very little difference between new buildings in Mississauga, Sarnia, Guelph or Sault Ste. Marie, and again between Moose Jaw or Vancouver or Acadie-Bathurst. They all have about the same design, same layout, same top concourse surrounding a ring of seats, and while they're all perfectly good at what they do, there's not a huge number of reasons to keep seeing new ones unless you're as hardcore as I am.

The Sadlon Arena in Barrie was the prototype in my mind. Opening on New Year's Eve, 1995, it set the standard for new rinks in the 1990s for the rest of the CHL. However, like the first kid on the block to get a new toy, it has since been surpassed by its descendant rinks, to the point that today it already is out of date, and too small to host major events like the Memorial Cup.

Located on the suburban southern fringe of Barrie within sight of Highway 400, the arena sits among countless big-box stores and across the street from Park Place (the former Molson Park). The former Barrie Molson Centre is an attractive light-coloured building with an arched roofline and a huge marquee sign announcing its presence to the surrounding neighbourhood. Like the rest of its suburban brethren, Sadlon Arena has a huge parking lot on-site. The arena has a restaurant built into the front of the building which is open even when the rest of the rink is not, and which is one of the more interesting "little extras" built into the OHL experience in Barrie. If you choose to have dinner there before the game, you may find yourself seated at a table with a panoramic view of the ice surface through a huge glass wall behind one of the nets. If you choose to enter the normal way, the building really has no lobby but only a tiny vestibule with ticket windows, and behind that, the seating bowl.

The concourse in Barrie is laid out in a U-shape, underneath the seating bowl instead of at the top of it. As a result, you can't see the game from the concourse as in most of the clones. However, in both ends the concourse takes an interesting departure - in one end, the seats taper down so that you can see the ice from the open concourse, whereas in the other end the concourse takes you directly through the restaurant! The one end of seats also is connected with the restaurant all the way down to the glass, with full food service. By new building standards, the arena is anything but boringly symmetrical. There are only about ten or fewer rows of seats in each end, in comparison to well over 20 on the sides. On one side of the ice the seats form a wall all the way into the rafters, while on the other there is something I have never seen in any other arena before - the private suites are not up at the top of the arena like in most buildings, but are literally right down at the glass. The general seating area only starts with "Row 7" at the top of the suite level. As a result of the strange design, the capacity of Sadlon Arena is lower than it could be had they used all available space for seating. Even so, the angle of the seats is very steep for a new building, and the low capacity means that all views of the ice are excellent.

Peripherals in Barrie are decent enough for a new building. Concessions are fewer than they could be but there is food service even in the seats with roaming concessionaires, a nice touch rarely seen in the OHL. Washrooms are perfectly adequate. The team store is big enough and sells the usual assortment of gear, as does a couple of souvenir kiosks spaced throughout the concourse. The last time I visited, the scoreboard was beginning to show its age with a number of burnt-out bulbs in both the centre-ice clock and the ordinary hockey board in the one end, with four projection video screens set up in the rafters near the blue lines. I have been told that the Molson Centre now has a centre video board, and I'll review it next time I make it to Barrie for a game.

Fan support in Barrie is a little difficult to understand. The arena is laid out perfectly for a raucous atmosphere, with steep seats on top of the action and a small capacity, plus the fact that Barrie usually draws near capacity crowds. Yet the arena is easily the quietest building in the OHL. My first visit, we sat directly at the top of the building in the last row, and could literally hear the lights humming during play. For my second visit we were lower, but the near-capacity crowd was still stoic and silent. It's hard to figure out. At one point the team even piped in "Go Colts Go" cheering over the loudspeakers for about thirty seconds - about the most bush-league thing any hockey team can do - and even then, the fans sat on their hands and quietly ignored the prompting.

Much like baseball's "cookie-cutter" ballparks of the 1970's, Sadlon Arena is almost identical to other new rinks across Canada, with only minor details distinguishing between them. Sadlon Arena should be among the best, with its steep seating and great views, yet it's still a place without much of a soul. Still, Barrie has made a great home to the OHL since the Colts' formation in 1995, and it is a testament to the fans there that the building has never had much of a problem selling out. Fans are devoted and knowledgable. I just wonder whether they'll ever learn to cheer. 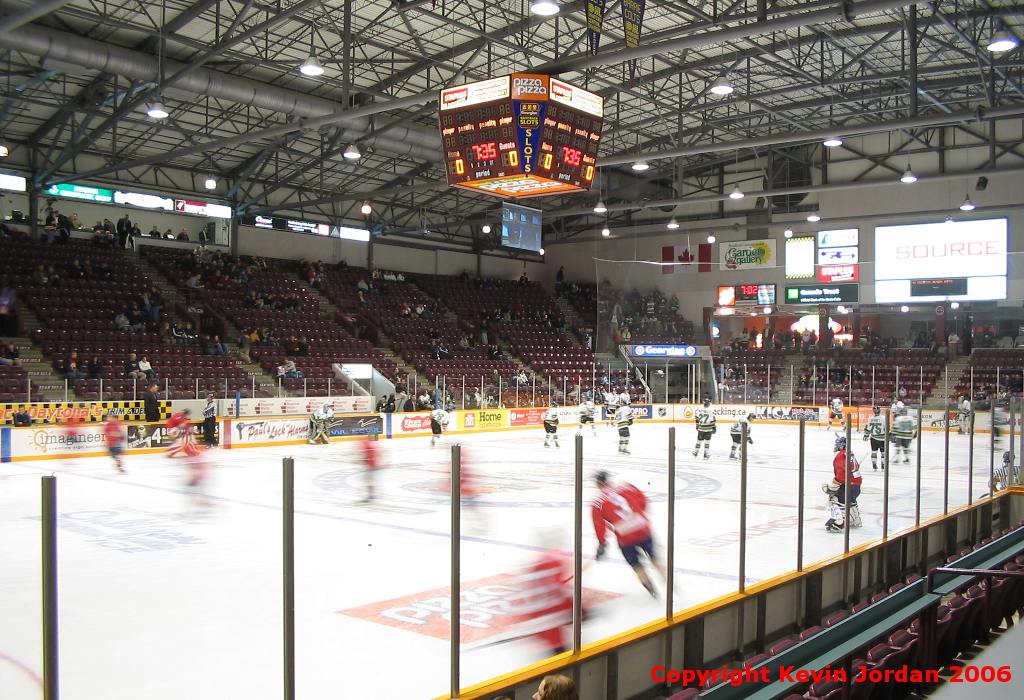 Future Developments
The agreement between Molson Breweries and the city of Barrie for naming rights expired in 2017, and the city attempted to sell the naming rights to the newest highest bidder, but failed to find anyone willing to meet the asking price. So the city just carried on, keeping the name the same as though nothing had happened. After two years of, essentially, giving Molson Coors the naming rights to a major arena for free, the brewery decided it no longer wanted its name attached to the arena, and sent the city a cease-and-desist letter. That's right - Molson wanted so little to do with the former Molson Centre that it threatened a lawsuit to get its name off the building. As of the fall of 2019, the arena was technically named the "BMC", and in November 2019 the naming rights were finally sold to Paul Sadlon Motors, a local auto dealer.

Barrie has been the OHL's "always a bridesmaid, never a bride" city, having unsuccessfully bid for the Memorial Cup more than any other CHL city. Sadlon Arena is the reason for this. Barrie city council, when debating the construction of the new arena, apparently looked at the OHL's minimum size guideline of 4000 seats and thought, "well, I guess we'll build 4000 seats!" As a result, the arena is way too small to host any major events in spite of the success the Colts have had on-ice since their formation. Today, most people in Barrie will readily admit that the arena was built too small.

As far as I know, there are no plans to renovate the Sadlon Arena, however most in the city will agree that it will be necessary at some point in the near future. Given the building's layout, it should be possible to expand the 18-row seating bowl on the one side around the end of the arena without too much difficulty, a move that would bring in at least another 500 seats without sacrificing any of the building's quirks, such as the ice-level suites.


Franchise History
Barrie was added to the OHL as an expansion team in 1995-96. It was Barrie's first OHL team since the 1950's, and because the Molson Centre wasn't finished on time, the Colts originally played at the same place as the 1950's Barrie Flyers did - the now-demolished Barrie Arena. The new arena opened in December 1995. 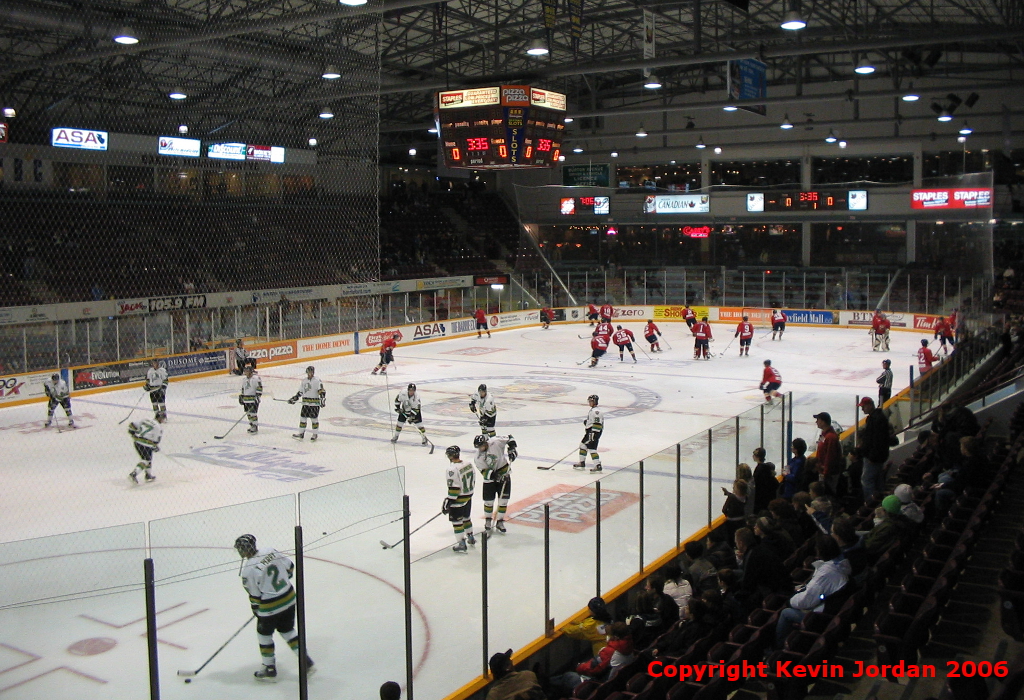