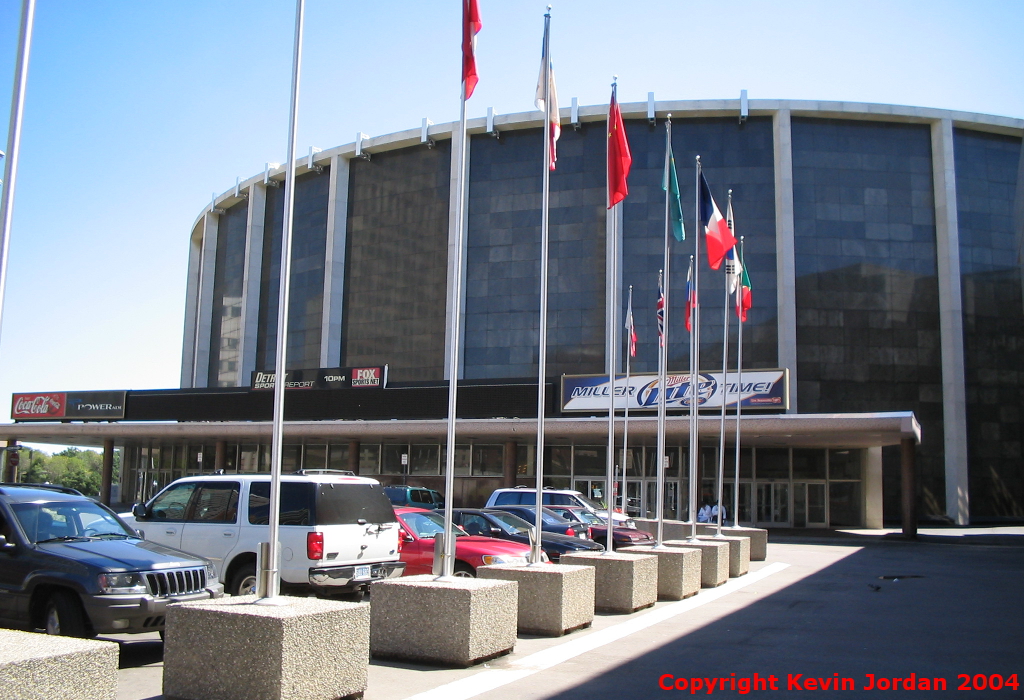 Cobo Arena was only used by the OHL for one season, 1990-91, before the expansion Detroit Ambassadors moved to Joe Louis Arena next door. The arena opened in 1961 and was gutted on the inside in 2015; today the arena shell remains the same but the interior has been turned into more exhibit space for Cobo Hall, the adjacent convention center. The only thing remaining of the original arena is the lobby area and one concession stand, which has been retained and converted into a food court for Cobo Hall.

Back in its heyday, the seating area was "U"-shaped and was therefore an ideal venue for concerts. Cobo Arena was the "Home of Arena-Rock" in the 1970's, with Motor City artists like Ted Nugent combining with out-of-towners like KISS and Aerosmith to shape the bombastic arena-rock sound. For hockey, the arena floor was apparently not large enough for a full-sized sheet of ice, so several rows of seats had to be removed behind the net. Cobo Arena also didn't have a full-time Zamboni, so for the season the Ambassadors played there (which was the last time Cobo had a full-time hockey tenant), Olympia Entertainment actually drove the Zamboni between the two buildings down Atwater Street.

Paul Smielewski says:
I went to a couple games at Cobo Arena the first season of the Ambassadors. Sight lines weren't bad, except for a few places. Much like America West Arena in Phoenix, it wasn't built with a floor large enough for a rink, so they removed a decent chunk of the first level. Coupled with the fact that it is a "C" shaped arena, with no seating on one end, this meant that many of what would be the best seats to watch hockey didn't exist. Like Windsor Arena just across the river, the front row seats on the west end of the rink were at least 10-12 feet above the ice surface.

The first level has three concourses; one on the floor level, underneath the seating bowl, one inside the bowl (strictly for traffic; no concessions), and one outside the bowl, beneath the second level, where the concessions stand. All of them were open to the public, which probably made security a nightmare. One infamous security lapse: the infamous incident where Nancy Kerrigan was attacked by Tonya Harding's husband and compatriots occured in the floor level concourse.

The second level began just barely above the first, 10-15 feet above the back row of seats and cantilevered out over the lower level. It also has two concourses, inside and out, the inside concourse breaks up the rake of the seats just like the lower level. On the whole, sight lines in the bowl were pretty good, not nearly as high up as, say, Joe Louis Arena. The claims to fame, besides being the home of the first American team in the OHL: the aforementioned US Olympic trials with Harding and Kerrigan; it was the home of the WHA Michigan Stags for a few short months; the table tennis tournament that marked the first athletic competition between the US and Communist China was held there; and Bob Seger's big breakthrough album, 'Live Bullet', was recorded during his concert there. With its small standard floor plan and lack of seats behind the stage area, Cobo has always been more of an auditorium and less of a stadium.


What's the Arena Used for Today?
Cobo Arena's main space is now the "Riverview Ballroom" of the Cobo Hall complex. I personally haven't had the chance to go in, as the last time I was at Cobo Hall for the 2016 Detroit Auto Show the ballroom was closed.