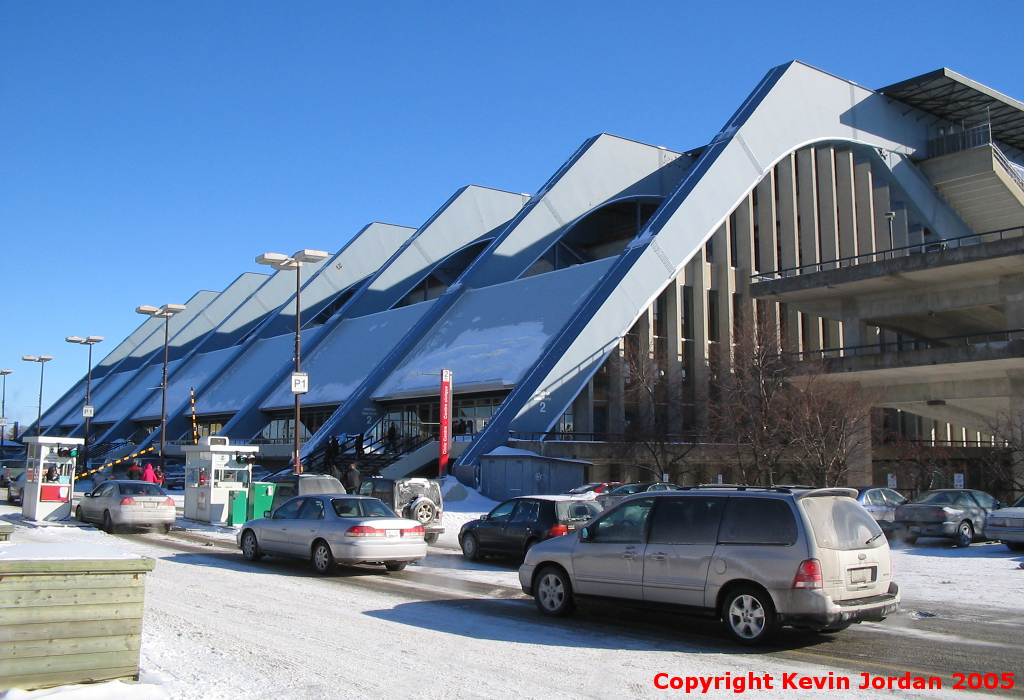 Starting in the 1960's, as the first generation of concrete-and-steel stadiums started to reach the end of their natural lifespans, cities charged with replacing them started to think about ways to save on costs. The prototypes were combined football and baseball stadiums, like New York's Shea Stadium or St. Louis's Busch Stadium; 1960's designs that could easily accommodate either sport, although neither sport was particularly well-served by having to share. The multipurpose stadium trend lasted into the 1990's, and while it has mostly died out now, it was an interesting era in stadium design.

The city of Ottawa jumped on the multipurpose stadium trend in the mid-60's like many other cities, but their need to accommodate was not the usual combination of baseball, football, and track & field, but was rather the two most popular Canadian sports of the time. Landsdowne Park, the home of the CFL's Rough Riders, was derelict and needed replacing, and the Ottawa Auditorium downtown, once home of the original NHL Senators, was also at the end of its lifespan. The Ottawa city council of the time decided, uniquely to build a multipurpose stadium accommodating an outdoor football stadium and an indoor hockey arena, and that design decision created one of the weirdest, most unique hockey arenas anywhere on earth.

Opening in 1968, the original building consisted of two football grandstands surrounding a Canadian football field, and underneath the north grandstand, a 10,000 seat arena was built. From a distance, the Civic Centre is a football stadium. One would never know that the arena was even there if one wasn't looking for it. The arena has massive steel supports jutting out from the stadium roof, and there is little to identify that hockey also takes place on site. Once upon a time, there was enough surface parking to accommodate a full football stadium's worth of people, but the 2012-14 Landsdowne Live renovation filled in all that empty space with shops, restaurants and offices. Therefore, and uniquely in the OHL, Ottawa now has heated underground parking on site. It's not free, but you won't care on a -40° February night when you get to climb into a toasty warm car for the drive home.

There really isn't a main lobby in the Civic Centre. Multiple doors open directly onto the concourse, and since most of the arena is excavated underground, you enter the building at mid-level. On three sides, the concourse is wide and airy, with high ceilings and the rise of the upper deck grandstand rising overhead. On the fourth (short) side, you could be in an entirely different arena. The ceilings under the football grandstand are low, and there's only a dozen rows of seats or so. From the ice surface, a massive wall rises from the boards to accomodate the football concourse, and while Ottawa used to have a centre video scoreboard, the renovation in the mid-2010's removed it in favour of a massive projection screen on the blank wall. Guests on the short side are served by televisions hanging over each section.

All seats are dark red and heavily padded like those in a movie theatre. Views are all pretty decent, although being near the back of the top level is a bit uncomfortably far away from the action. The seats on the short side are a bit claustrophobic as well with the low ceilings. There is a row of private boxes hung high above the ice on the high side, and the press box is right at centre ice. For the past several years the 67's have curtained-off the upper level of the arena, but I've sat up there before and can vouch for the views being mostly terrific up high. The one exception is if you sit too far back, where, much like in Halifax, the aftermarket private suites will obstruct your view of everything except the ice surface itself.

Once the game begins the quality of the Civic Centre experience continues. There is a professional-quality pregame show, and while the 67's do play some contemporary music, they also have a terrific trumpeter who roams the stands playing traditional hockey music. It's a nice change from the usual top-40 nonsense, and it's different from the traditional organ music as well. The building's peripherals are decent; the washrooms are clean and the sound system is clear without being overpowering.

My few pet peeves with the Civic Centre are small but notable. The 67's have a large number of promotions, which I'm not a fan of, and they also are one of only a handful of OHL teams who have a squad of cheerleaders. While I'm most definitely not against scantily-clad women in principle, they don't belong at a hockey game. Finally, on the short side of the building the 67's have installed heat lamps in the seating area. I'm not sure why this is done, as the building isn't cold by any stretch, but it was a strange and uncomfortable experience spending the game feeling like a steam tray of wontons.

What was then called the Ottawa Civic Centre was the last arena I visited to complete my original OHL 20. I had a fantastic time at the building and I have good memories of it. I suppose the best way to sum up the arena is to say that it's a dual building - the large half of the building is NHL-sized, with the design reminiscent of other 1960's and 1970's buildings like Joe Louis Arena, Continental Arena, Nassau Coliseum or the Northlands Coliseum. In point of fact, the Civic Centre has been used by the NHL, as the Senators played out of the arena from 1992-96 while Scotiabank Place was under construction out in the middle of nowhere. The short half of the Civic Centre, though, is another world, where the fans sit close, the views are obstructed somewhat and the noise carries. Perhaps it is to the city of Ottawa's credit that they built a building with the best of both worlds - one Civic Centre for the fan who wants comfort, fun, and a professional atmosphere, and one for the fan who wants to cheer and yell at the players. I made the trip back in 2015 to check out the building after its massive renovation project and found it mostly unchanged - the renovations brought the rink up to code and fixed the leaky roof, but didn't alter the building's soul.

Multipurpose didn't really work well in a football and baseball context. The cookie-cutter multipurpose stadiums in MLB have now all been replaced save Oakland, and few people lament their loss. Ottawa's multipurpose stadium was unique by design, and while I wouldn't exactly want to see the design replicated elsewhere, TD Place Arena and TD Place Stadium work together. It shouldn't work, but it does. The 67's still have a place to call their own, in the heart of Ottawa, on a site where sport has been played for over a century. Long may it continue. 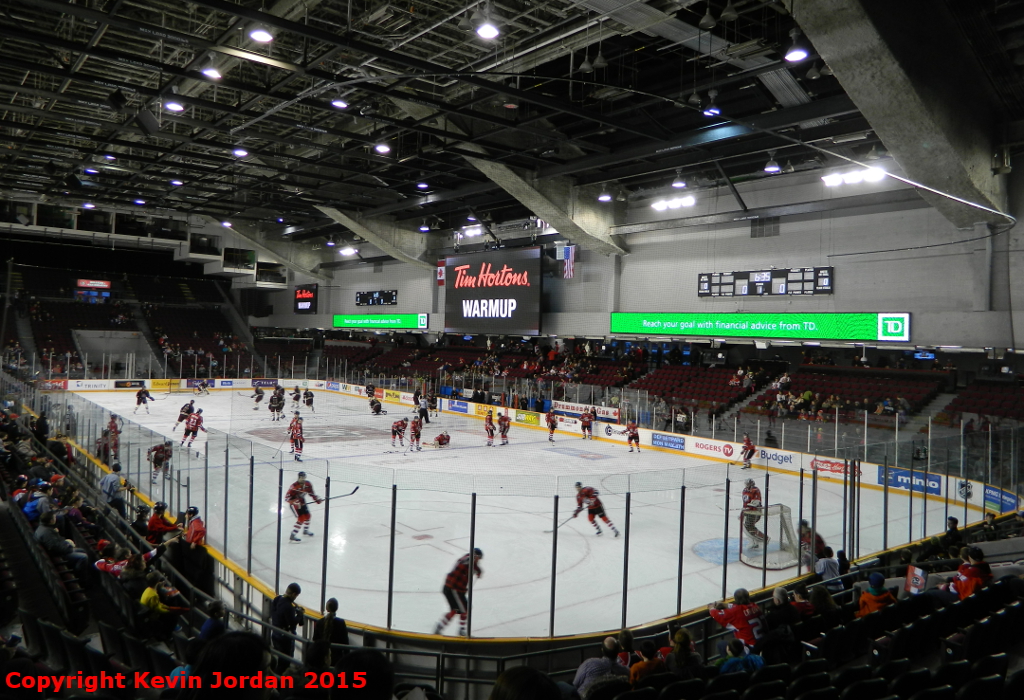 Future Developments
The rapid deterioration of the Landsdowne Park facility in the first decade of the new millennium, which culminated in the entire south grandstand of the former football stadium being condemned and demolished, resulted in the stadium and arena receiving a comprehensive overhaul. The 67's spent the entirety of the 2012-13 and 2013-14 seasons at Scotiabank Place while a massive rebuilding of the football stadium took place, and the complex was turned into a multi-use entertainment centre. The difference is striking - the former unloved 1960's concrete stadium surrounded by parking lots is now a modern stadium surrounded by restaurants, bars and shopping. Parking has moved underground (which in Ottawa winters is excellent!) and Landsdowne Park is now a showpiece for the city. As far as the arena goes, well, not much obvious has changed, but at least you can say that it's no longer in danger of falling over.

Following the Landsdowne Live project's completion, there are no further plans to renovate or replace TD Place Arena.


Franchise History
The Ottawa 67's were added to the OHL as an expansion team in 1967-68. Originally they were supposed to begin play in the Civic Centre from the beginning, but the building's construction fell behind schedule and the team played the first half of the 1967-68 season at Robert Guertin Arena in Hull, before moving into the Civic Centre in January 1968. The 67's also played at Scotiabank Place in Kanata in the 2012-13 and 2013-14 seasons while the Civic Centre was under renovation. 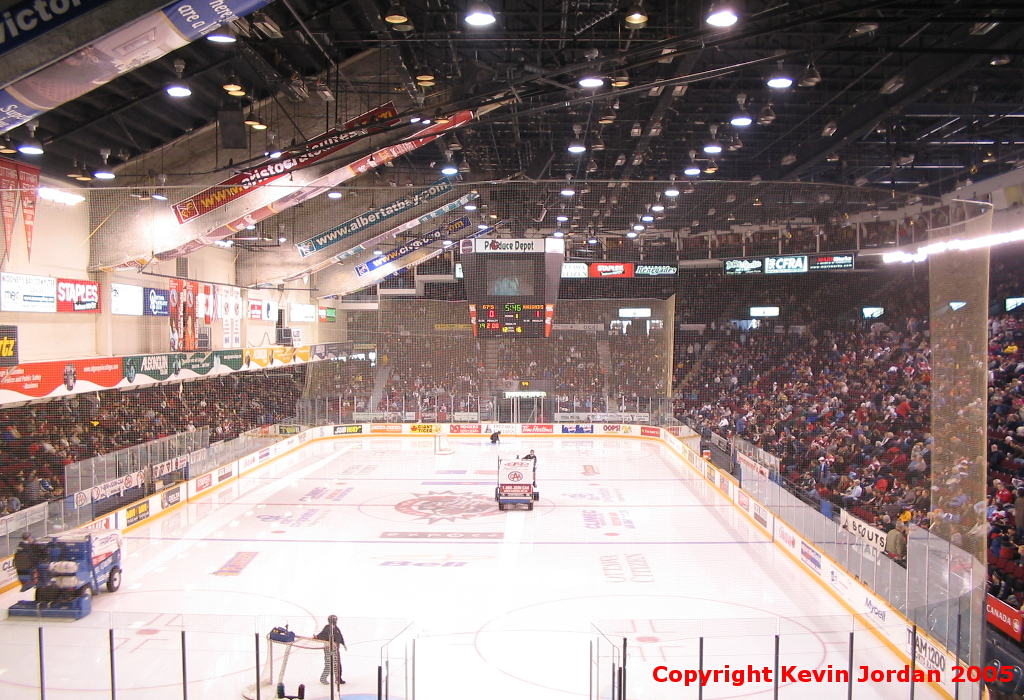