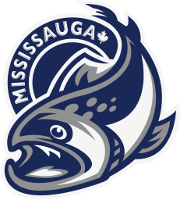 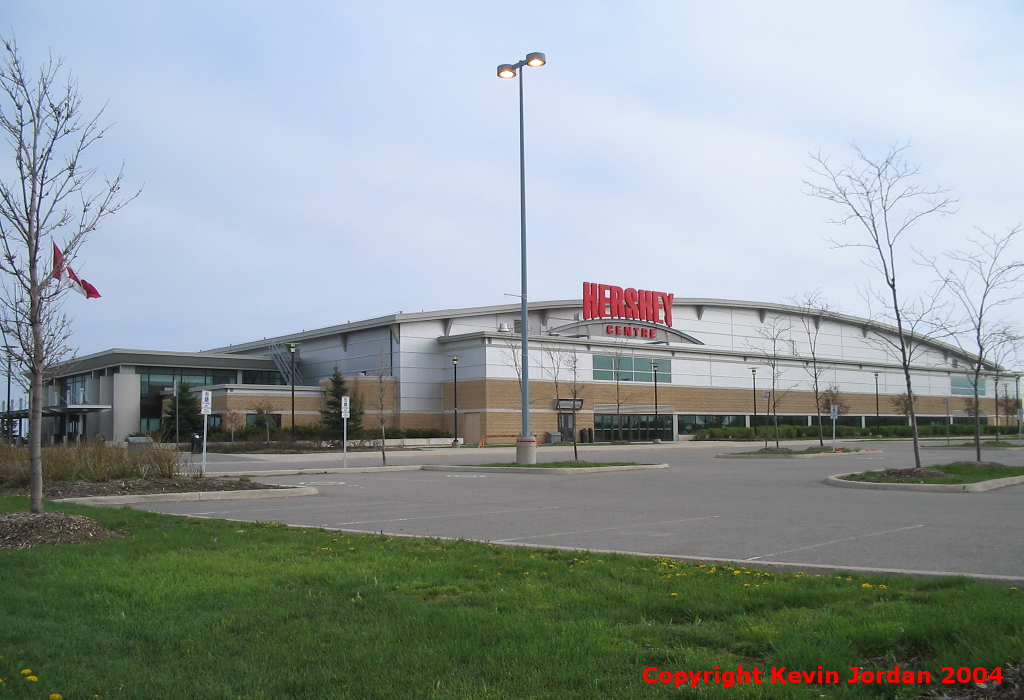 Pity the Mississauga junior hockey fan. There aren't many of them, but they do exist, and their passion for the game is unchanged from any others across this country. So imagine what it was like to buy season tickets for one of the worst franchises in junior hockey history starting in the late 1990's. To show up and watch their team get blown out nearly every single game. To support them unconditionally through a horrible stretch of growing pains including seasons of four and three wins. Then, finally, midway through the 2000's, the IceDogs finally became a respectable team, only to be bought out by the billionaire owner of a rival team and hustled out of town so that he could abduct their beautiful arena. The few Mississauga diehards out there have been through a lot, is what I'm trying to say here. Finally, though, for the majority of them who've accepted that they are now expected to be Steelheads fans, after the third identity change in five years, they at least have stable and rich ownership willing to invest in the team, and the new team, by whatever name, finally seems poised to potentially break out and conquer the hearts and minds of the residents of Canada's biggest suburban wasteland.

The now-renamed Paramount Centre today is mostly unchanged from the last years of the IceDogs. It is a yellow-brick sports complex in the sprawling heart of Mississauga. The neighbourhood is filled with one and two-storey office complexes and there quite literally is no retail or restaurants in the area whatsoever; it's all office parks and acres of parking lots. The arena itself sits within spitting distance of Highway 403, but there is as of yet no direct entrance from that road serving the arena, which means that you have to drive a bit to get there once off the expressway. While the neighbourhood is all concrete and asphalt and landscaped corporate bacchanalia, the Paramount Centre itself is actually quite nice - a sprawling yellow brick building with several community pads accentuating the main bowl, and a huge red sign announcing the arena's presence to the neighbourhood. There is a new sportsplex next door as well. Being Mississauga, everyone drives to the game, which dictates massive parking lots which are, fortunately enough, free.

The arena sits on a slight hill, with the main entrance to the building slightly elevated. The ticket office lies in one end of the building, with an immediate opening to a wide concourse. Much like every other new OHL building constructed in the past dozen years, the Paramount Centre features wide concourses with concessions, souvenir stands and a small lounge area dotting them. True to the building's namesake, the concessions feature Paramount shawarmas and other Middle Eastern goodies in addition to the usual arena fare. The decor is mostly exposed concrete, with little ornamentation to dress up the place. If you watch TV commercials in Canada, you've probably seen the Paramount Centre before on the small screen, as it's commonly filmed for ads ranging from Reebok to Mastercard.

The concourses offer no view of the arena bowl, so once you make your way through one of the gates you find yourself in one of the OHL's finest arenas. The place is big and feels like it, with a solid 6,000 maroon seats in addition to a full compliment of luxury suites. There is a restaurant located at the top of the seating area running down the one side, and standing-room located in both ends. The bowl is pretty uniform, with a standard angle of seating. The four "open" areas for wheelchair seating in the four corners of the rink are the only things that make the bowl itself stand out. Above suite level on the one side sits the American and Canadian flags along with something often seen in older Canadian rinks like Kingston and Peterborough but almost never in new ones - a portrait of Her Majesty Queen Elizabeth the Second. It's a great and classy touch; one I'm told was mandated by former IceDogs owner and staunch monarchist Don Cherry.

As you might expect from a new building, facilities are great. Washrooms are clean and plentiful, seats are wide, and the sound system is clear enough. There was no video board as of the last time I visited, but I'm told the one that exists now is among the best in the OHL. Of all the identikit new arenas that have sprung up in the past decade, Mississauga's stands atop the heap in most categories. The Steelheads have added a few touches to make the place theirs, but unfortunately, none of the old Majors' banners have yet made the trip, as the current ownership considers their founding date to be the day when they were renamed to the Steelheads.

Unfortunately, attendance has always been something of a problem in Mississauga, and as of 2006-07, with the IceDogs a lame-duck franchise waiting to be sold and moved, what was left of the team's fanbase mostly dried up. Announced attendances were usually around the 1,000 mark, with the actual number of people in the seats much less than that. I attended the Knights-IceDogs game in 2006 for my third visit to the Hershey Centre and was dumbfounded at how empty the building was - it was quite literally the most sparsely attended hockey game I have ever been to, and that includes the three-win season in London in 1995-96. It may have been a Wednesday night, but it was still a game between two teams at the top of the league with a number of top prospects on the ice, and yet goals were scored to near silence and apathy from the few hardy souls that braved unseasonable warmth and clear roads and actually turned up. I can't really say I blamed the Mississaugans for staying away given what was going to happen to them, but still, less than 1,000 fans in a 6,000 seat building is an embarrassment. I would say that it was like watching hockey in a vacuum... except most vacuums make noise when they're running. Fortunately, the attendance appears to be rebounding slightly now with the Steelheads' residency, though given how much upheaval there has been in Mississauga since the OHL arrived over twenty years ago, one would forgive the locals for throwing their arms up in the air and saying "enough".

With Steelheads' owner Elliot Kerr having re-upped for a new lease, the Paramount Centre will still host the league long into the future. But man, does he have his work cut out for him! Selling any hockey independently of Maple Leaf Sports and World Domination in Toronto is a fool's game, and moreso when you consider that Mississauga fans have been jerked around with a decade of lousy hockey preceding the uprooting of their original team to St. Catharines. It's a shame that such a palace as the Paramount Centre has been wasted on Mississauga, where, apart from the small collection of diehards that still attend the games and are as passionate as any fans in the league, the people simply commute to Toronto every day, live their lives, and completely ignore the world's best and most affordable hockey in a great arena right on their doorstep. 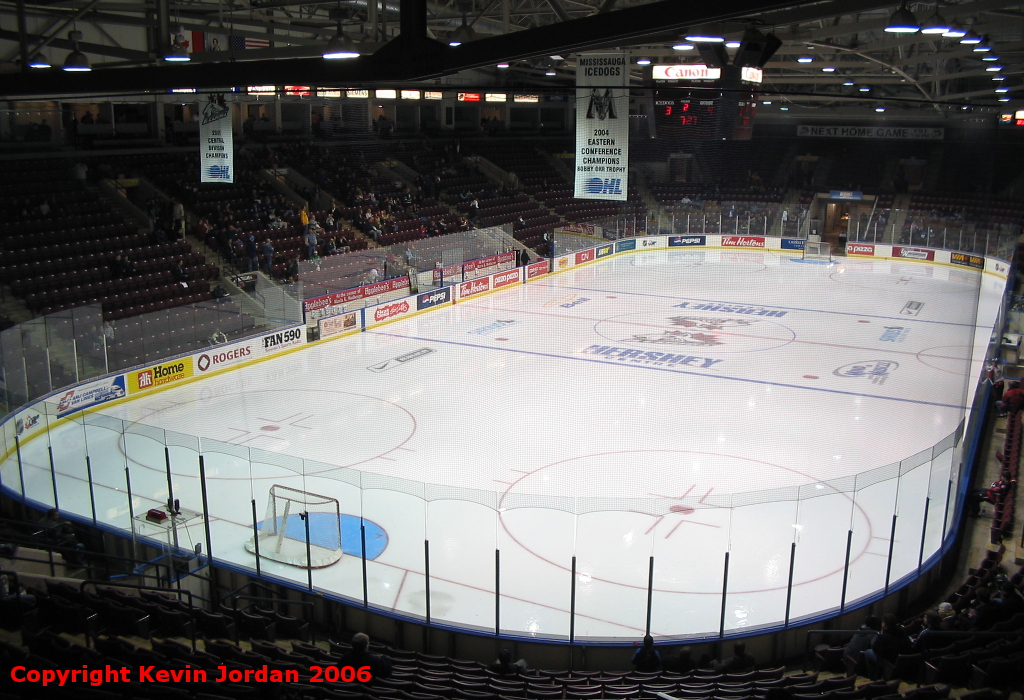 Future Developments
There are no plans to renovate or replace the Paramount Centre.


Franchise History
The St. Michael's Majors were originally founded in 1906, but the school dropped out of the OHL in 1961. From what was once the Majors' website: "In 1961, hockey at St. Mike's was riding high. The Majors had just won their fourth Memorial Cup; more than any other team at the time. The Buzzers had followed up with another O.H.A. Junior "B" crown. The new St. Michael's Arena promised to fulfill the vision of 'hockey for every boy at St. Michael's'.

The current Majors were added to the OHL as an expansion team in 1997-98. The new Majors played out of Maple Leaf Gardens originally, but moved into the St. Michael's College School Arena when MLG closed. The move to the tiny College rink was supposed to be temporary, but lasted for much longer than it should have as Eugene Melnyk tried in vain to build a new arena complex in Toronto independently of Maple Leaf Sports and Global Domination. In 2006 Melnyk bought the Mississauga IceDogs from then-owner Mario Forgione, and ran that team as a lame-duck for one season before selling them to printing executive Bill Burke, who moved them to St. Catharines. The move was made so that the Majors could take over the IceDogs' lease at the Hershey Centre, and so in the end, the Majors got their arena and the Niagara region got a team back for the first time in a decade. In 2012, another new ownership group finally broke from the College again and renamed the team from Majors to Steelheads.