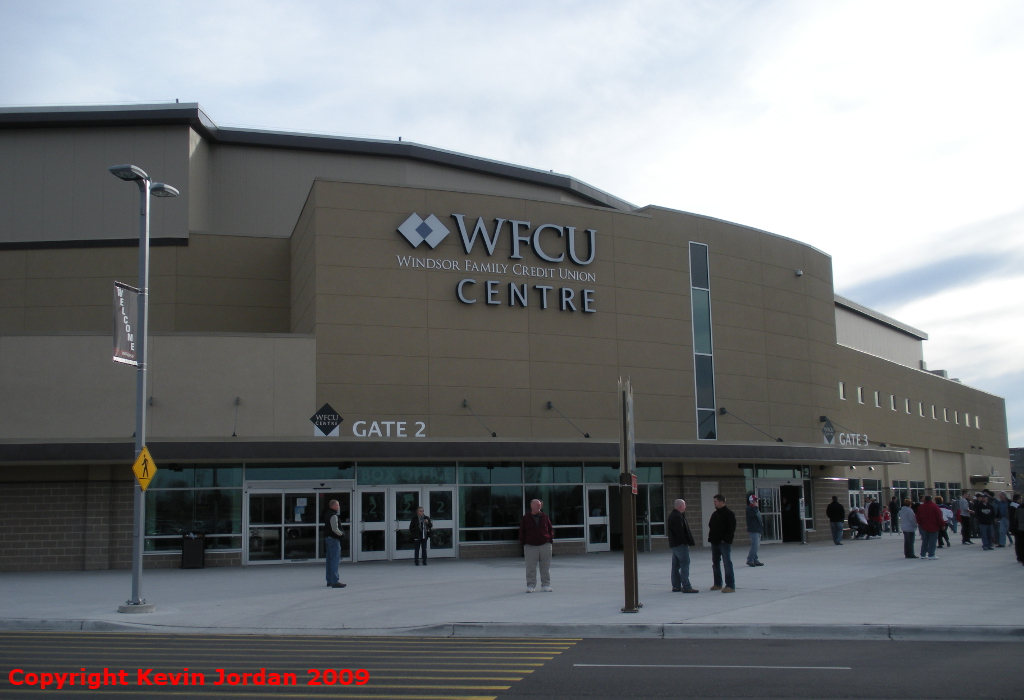 Apart from the loss of my beloved London Ice House in 2002, there has been no other CHL arena closure that I've felt more personally than that of Windsor Arena. While I'm about as far from a Spitfires fan as is possible, I always loved making the trip down the highway to Windsor to take in the atmosphere at the Barn. There were two main things about going to games at Windsor Arena that I loved. First of all, I loved the feeling of stepping back in time and sitting in an 80-year-old madhouse where absolutely anything could happen, from games delayed by squirrels to visiting players nearly electrocuted in the locker room. And the second thing I loved was taking in the intense, blue-collar atmosphere that existed virtually nowhere else at any level of hockey. Even though the fans could occasionally cross the line, and even though being a Knights fan there occasionally made me fear for my safety, I still loved making the trip, and attending the last game there in December of 2008 was an emotional and bittersweet experience for me. So in taking in my first game at the new WFCU Centre a few months later, two main thoughts crossed my mind. The first was that the new rink is a palace, with the same steep seating that the old barn had, combined with new facilities that could be the envy of any in the CHL. And the second was that the old madhouse atmosphere has mostly survived.

Unlike the old arena with its gritty, downtown location, the new WFCU Centre sits in Forest Glade, closer to Tecumseh Town Centre than the Ambassador Bridge. The neighbourhood seems to be one in major transition, as former industrial brownfields in the arena are being converted into retail. As of my first visit, the massive former GM/Lear plant on Lauzon was being demolished next door, and the apparent plan is to build a massive shopping complex on the site, though ten years later, construction still hadn't started. As for the new arena itself, it is a sprawling building in yellow and tan brick, surrounded by parking lots, and with a community rink complex attached on the far side. The new building's grounds are still a work in progress after a decade, and there still is nowhere near enough parking space to handle the crowds when the building is full. After a decade in the new arena, this seems like a colossal oversight, though the Spitfires currently aren't selling out very often.

Once inside the arena, you enter into the very lap of luxury. Ornate hallways extend 3/4 of the way around the building, with elegant wood trim, panelled ceilings and soft lighting. It would seem that the dingy corridors of Windsor Arena have finally been consigned to history. The team has set up numerous souvenir booths, food stands, and other ways to drop a few bucks around the concourse, and there are two full team stores in the building, with a Spitfires-only store being complimented by a Pro Shop that sells hockey gear and is open to the community pads. In one end is a dry-land training facility and gym which looked packed with kids, and along one side there is also a club seat lounge running down one side of the concourse. This part seemed to be off-limits to casual fans, although at least the concourse is open. The club has also preserved Mickey Renaud's locker exactly as it was the day he died in February 2008, and it is now a permanent memorial in the new rink. The fourth side of the arena features the team restaurant halfway up the seating area, and while access is blocked off pre- and post-game to ordinary fans, you're free to wander in the intermissions and during play. The one major flaw of the design is that while the concourse is an improvement on Windsor Arena's (although so is my living room), it's still way too narrow to handle 6,500 fans. Traffic still bottlenecks hugely during intermissions, and for the most part it's not worth leaving your seat.

But enough about the flaws. The seating bowl is angled sharply towards the heavens, much in the same style as the old arena. This is not the shallow, gradual rise of most new rinks, and the Spits deserve all the credit in the world for this. Maroon seats extend all the way around the building, with private suites running down both sides of the ice. The restaurant sits in the one end of the ice, while in the fourth end, seats climb nearly all the way to the roof, much like in Peterborough. The view up there is pretty incredible. Also, the ice is sunken below ground level, so concourse access is halfway up, which helps to prevent the end-of-period bottlenecks common at most other arenas. An eight-sided scoreboard hangs over centre ice, and both the screen and the graphics package used are top-notch. The boards are complimented by two small boards straddling the red line on either side of the ice (an odd setup, but it works) and the usual clock and shot counters in the corners. The sound system is also terrific, clear and loud without being overpowering.

And speaking of loud, Windsor's still got it. Yes, they've added some of the usual noise-killing promotional things most buildings have, like a promotions announcer and constant advertising, but the fans there are still just as jaw-droppingly loud as they always were. My first game in Windsor was for the Western Conference finals and was literally one of the best games I've seen, with two fantastic teams playing the game at the highest levels. The crowd completely responded and was well into the game, just like they used to be, with shouts, cheers, heckling, and everything else you've come to expect from a Windsor crowd. Experiencing the classic Spitfire atmosphere, just like it used to be, was extremely gratifying.

In the past several years, old rinks have been replaced many CHL cities. In each of the other cases, the atmosphere of the old place is largely not the same, and some of the new buildings are pretty much "junior hockey boilerplate", i.e. they're all pretty much the same, built from a template. Windsor's not like that. Spits fans were always crazy, hardcore, and boisterous, and they're still the same in the new rink, which, fortunately, isn't doing much to change that. The loss of Windsor Arena is one that anyone who loved history and tradition felt personally, but at least, in this case, the new arena does a pretty good job of replacing the feeling of the old rink, right down to the steep seats and the crowded hallways.

Inside the WFCU Centre 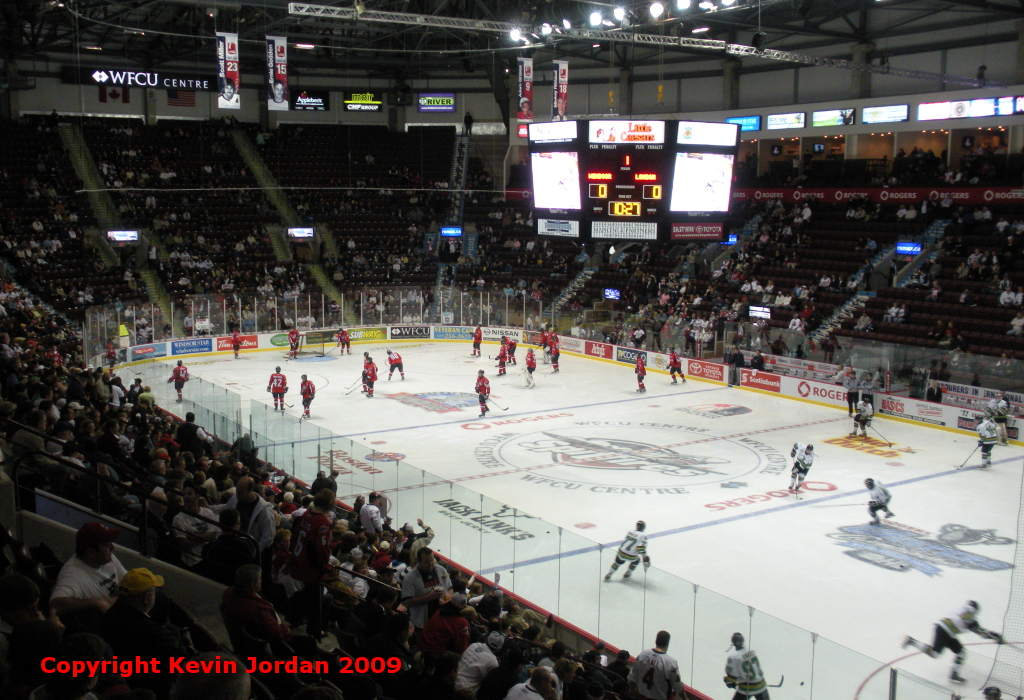 Future Developments
There are no plans to renovate or replace the WFCU Centre.


Franchise History
The Windsor Spitfires originally existed in the OHA back in its formative days but folded in 1953. Today's reborn Windsor Spitfires were added to the OHL as an expansion team in 1975-76. They moved mid-season from Windsor Arena to the WFCU Centre in December of 2008.


Retired Numbers
The Spitfires, bizarrely, choose to "honour" some of their players and "retire" others. The retired numbers are:

While the honoured numbers are:

Another Look Inside the WFCU Centre 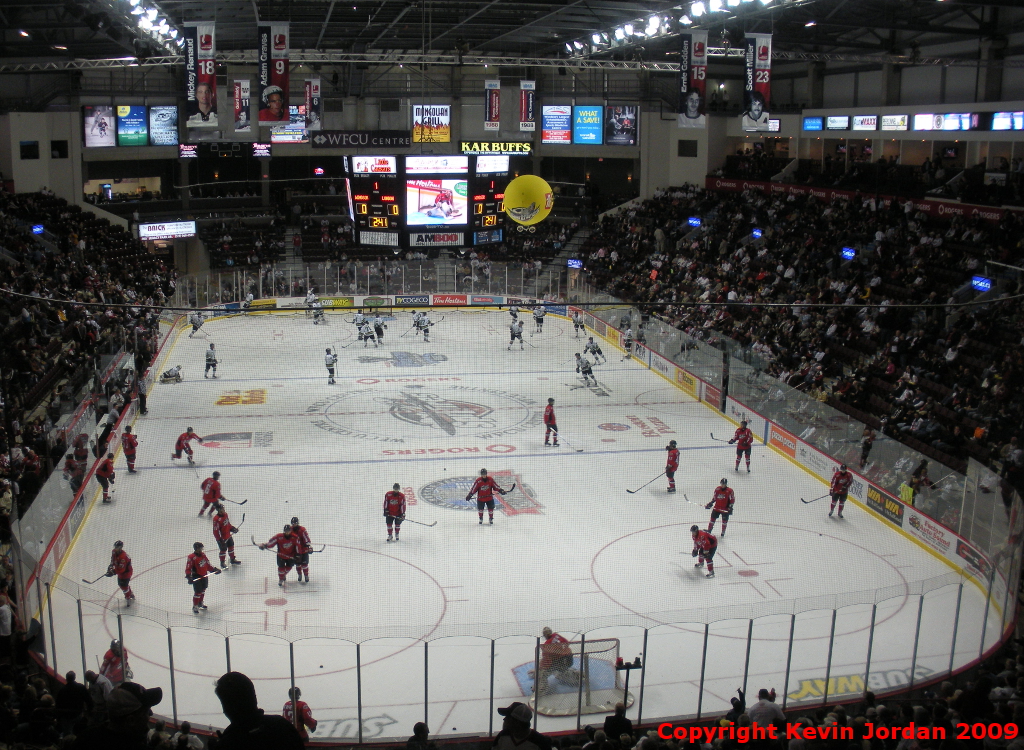