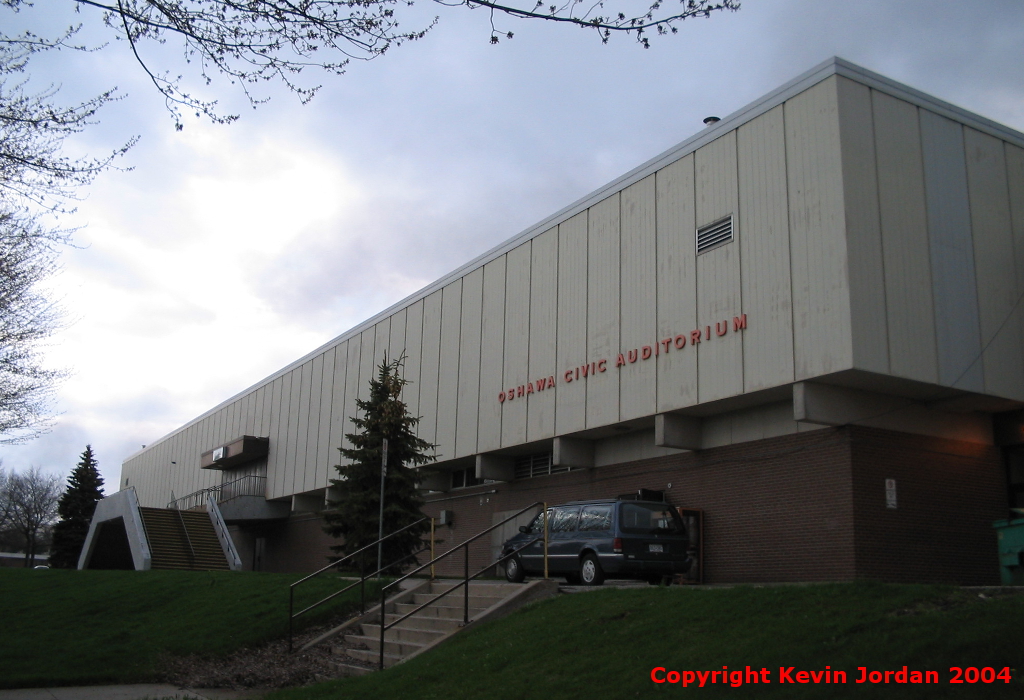 The Oshawa Civic Auditorium was one of the OHL's classics, home to a historic franchise and with a great atmosphere. Of all the arenas used by the OHL in its historic years, the Civic Aud was both the most intimate and the most community-oriented. Unlike the other, independent cities in Ontario, Oshawa has been part of the Greater Toronto Area for generations, and was never built with concerts or trade shows or anything else in mind apart from hockey and community use. The Auditorium lay on the southwest side of Oshawa in a residential district. It was a small building constructed on a hillside, so from the road, it appeared small and intimate, but from the back side where the parking lot was, it appeared to be too impossibly small to be a junior hockey arena. From the back end the Aud was only one storey tall, if that.

The Civic Auditorium was part a sports complex which still includes a swimming pool and a detached football stadium. The Oshawa Sports Hall of Fame was located in the lobby, and there was also a Bobby Orr Lounge for season-ticket holders. The arena is the main focus, though, and once inside the tiny main lobby of the Auditorium you saw small doors with a small, understated sign that reads "Auditorium". Once through the doors, the arena opened in front of you. The first sight was both impressive and surprising. The building looks small from the outside, but once inside, the arena's intimacy was stunning. The ceiling was so low that you could reach up and touch the roof trusses from the top of the concourse. The design was the 1960's dual concourse design also used in London and Brantford, with a top concourse around the top of the seating area and stairs in each corner giving access to a corridor below. While the London Ice House used their lower concourse, though, the Civic Auditorium largely did not except as the place where one went to use the washrooms. As a result, traffic bottlenecked around the top of the building during intermissions, and the lines to use the washroom could get long.

Seats were all relatively new and views were excellent. The low ceiling mandated low glass, and there were a few seats behind the benches where the view was obstructed because of glass, but for the most part the views were great. There were blue seats in the ends and red on the sides. There was standing-room all around the top of the seating areas. There were two press boxes, both on opposite sides of the building on the red line. The low ceiling limited the scoreboard to a strange design that I have never seen anywhere else - it was several feet long but only about three feet high, as a standard scoreboard would get in the way of play. The Civic Auditorium could never have had a video board! The ceiling also forced the team to place their championship banners above the seating area, as there was no room for them above the ice. The ceiling forced adjustments from visiting teams too, as it was impossible in Oshawa to dump a puck high in the air to clear a zone, as the puck would just bounce off the ceiling. The ceiling was covered in pock-marks from years of abuse. One other small touch I noticed is that the plastic dasher boards were done in Generals' colours, with red board tops and blue guards on the bottom. When 99% of hockey arenas use yellow shielding, it's nice to see one team keeping the old Montreal Forum tradition alive.

Speaking of tradition, the team and building did a great job of reminding visitors of the long heritage of junior hockey in Oshawa. There were pictures all over the walls of the arena, and it took a whole intermission to see them all properly. There were pictures of the fire that destroyed the old Oshawa Arena in 1953, pictures of a young Bobby Orr lighting up the rink in the 1960's, and pictures of the events that have taken place over the years in Oshawa, including one notorious Rolling Stones concert in 1979. Yes, you read that right. Playing two concerts in the GTA was part of Keith Richards' plea bargain to escape a Canadian drug conviction, and so the band played one show at Maple Leaf Gardens and one at the Oshawa Civic Auditorium.

Surprisingly for an old and unrenovated arena, the sound-system was crystal-clear and the announcer was among the league's best. He was an old-school hockey announcer with a nasal voice reminiscent of Paul Morris, and understood that his function was not to attempt to whip up enthusiasm but merely to properly call the game. Music wasn't too loud, and before every period the Generals played the old "Hockey Night in Canada" theme song, the version from the 1970's and 80's, to pump up the crowd. It was a wonderful touch.

Hockey arenas have a limited lifespan, and the Civic Auditorium reached the end of its useful life quietly. The building's construction in 1964 re-built junior hockey in the Motor City after the devastating Hambly Arena Fire in 1953, but time gradually passed the arena by. By the time of its closure it was ready to be shut. The Auditorium had not been properly maintained over the years in the way that older-but-more-up-to-date arenas such as in Kitchener have been, and as a result, the Civic Auditorium felt like it was beginning to fear the reaper in its final years, so to speak. Oshawa's rink was never one of the OHL's finest buildings, not even when new, but attending games there was fun nonetheless. The hockey history that has been made inside the Oshawa Aud is astounding, and the place had a fantastic atmosphere which has mainly transferred into the new Tribute Communities Centre downtown. As for the Aud, it was finally demolished over the summer of 2010. 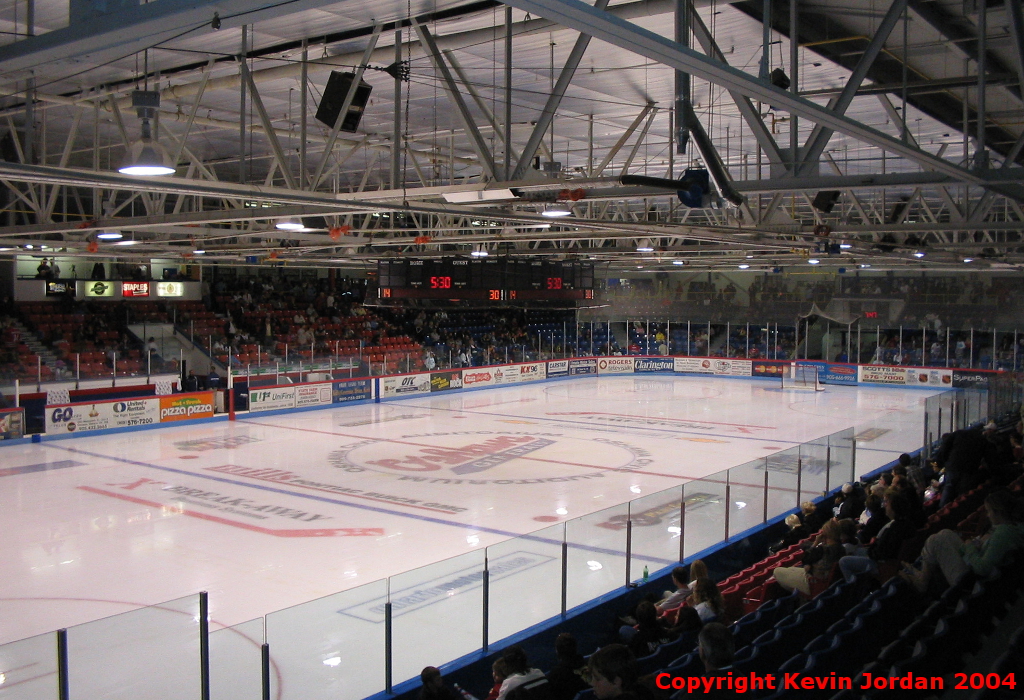 What's the Arena Used for Today?
The Civic Auditorium closed to the OHL on October 29, 2006, with a gala ceremony marking the end of an era in Oshawa's rich junior hockey history. The ice surface continued to be used by minor hockey and such until around Christmas that year, after which the ice was removed. The Civic Auditorium sat empty for four years and was finally demolished over the summer of 2010; the city built an indoor track and field facility on the site as well as constructing a new soccer/football field on what used to be the parking lot. Demolition photos can be found here and here.

The Site of Oshawa Civic Auditorium 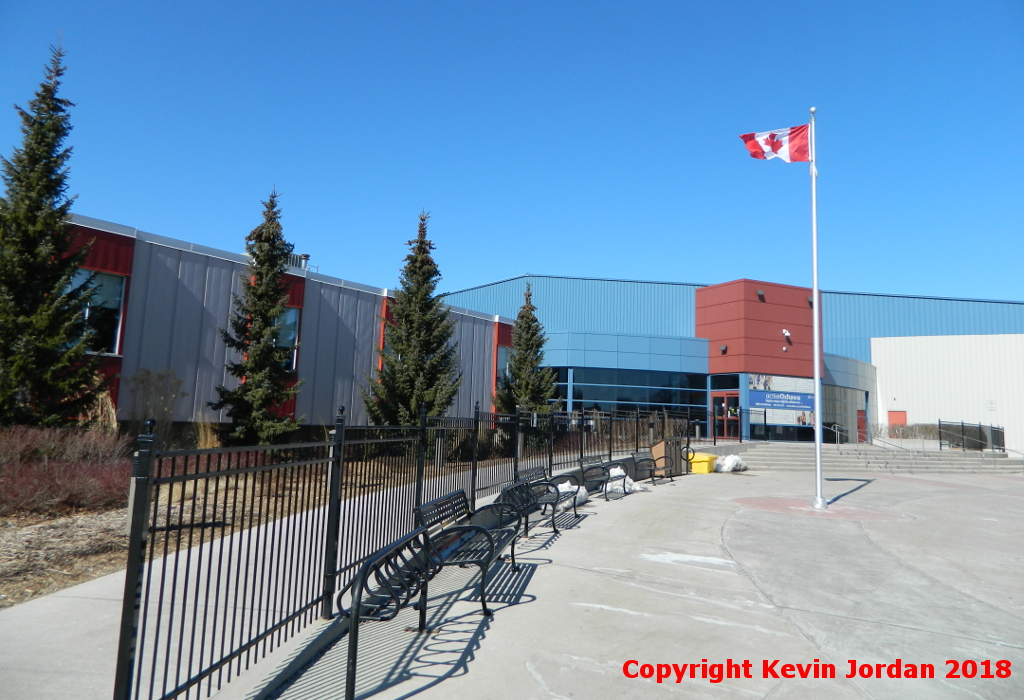 Return to Tribute Communities Centre
Return to the Main Menu