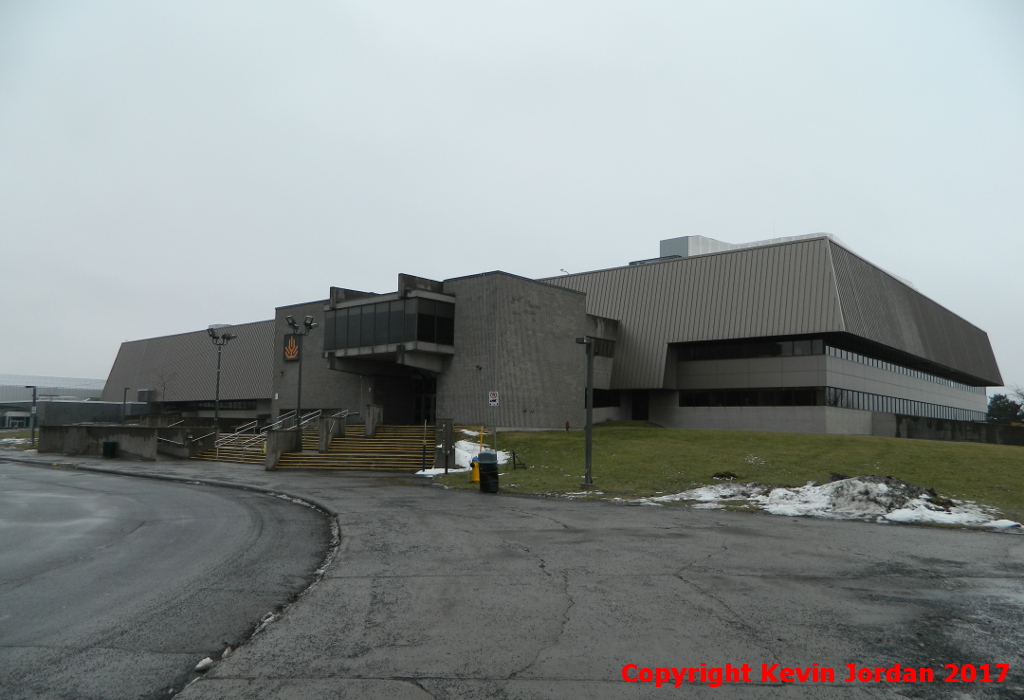 The Cornwall Civic Complex shares a distinction with the Robert Guertin Arena and the Montreal Forum in that those are the only three buildings that have hosted both a full time OHL and QMJHL tenant. It is a municipally-owned building built on parkland beside the St Lawrence River. It's built of concrete and dark brown aluminum siding and is dark and uninviting from the outside. A recent addition has resulted in the construction of a municipal swimming pool as well. There are also meeting rooms and a convention hall in the building.

Inside things improve greatly. Along the main entrance hall, there is a Royals history display along one wall opposite the ticket booths. Once entering the Ed Lumley Arena you find yourself in a concrete hallway with windows running along the outer wall, and the rise of the grandstand appearing over your head. Surprisingly, the grandstand does not extend to the ceiling of the building so if you had, say, a jetpack, you could jump from the concourse directly over the top of the grandstand and land in the last row of seats. There is a large mural of the Memorial Cup and the Royals' logo painted on the wall when you enter the arena, and there are also murals of Cornwall sports heroes including former Royals Doug Gilmour and Dale Hawerchuk.

The doorways that lead out into the seating bowl are actually that - doorways, with doors that shut. You have to open the door to enter, but once you do, you find yourself in a brightly lit arena done in primary colours. There are four grandstands but no corner seating, and as a result the building has the atmosphere of an English football ground or something similar, where the four stands are separate entities.

The seats are blue and the aisles red, with yellow on the ceiling. The scoreclock is relatively new and functional. The rows did not used to extend downwards to the ice level in Royals days, and as a result there was a large, unused area running around the outside of the arena floor. I'm told the locals used to refer to it as "the moat". Renovations to the arena in the lead-up to the 2008 Royal Bank Cup resulted in "temporary" seating being installed down on the arena floor, and the new seating has improved the situation greatly.

The Cornwall Civic Complex is a building constructed during the form-follows-function 1970's and is utilitarian without being beautiful; but it also has its charms. It was great to see Royal history on display. Furthermore, the unusual design makes the arena stand out among Ontario buildings. I saw a Junior A Colts game in Cornwall in 2008 and was amazed at how professional the building truly was, with a steep angle of seating contributing to a good atmosphere. In addition, the open area at the top of the seating could easily be converted into private suites. Whether or not Cornwall ever gets major junior hockey back, they would not likely need a new arena to do so.

Eric Cardinal says: Most people from Cornwall usually just refer to the arena as the Complex or the Civic Complex. The arena itself would not be considered an "old barn". It was constructed with a simple design that has aged well and would still be suitable to house a team to this day. Its seating and concession areas are a balanced rectangle shape of grey concrete and windows that face the St. Lawrence River. The ceiling of the arena itself has a very plain scoreboard amongst exposed metal rafters painted yellow. One major problem for the fans is that the seating doesn't go to the ice surface level. It stops at the bowl that would normally go straight to the glass. There is a 6 to 7 foot drop to floor level that is reserved for security, the players and wheelchairs. This design gives everyone a birds-eye-view of the ice, but fans feel distanced from the action.

Like most arenas, the teams would emerge from dressing rooms on the east side of the rink on opposite poles of the surface (home south, visiting north). They sat on benches the opposite sides of each other; visiting team on the west side with the penalty boxes and home team on the east side. This made for some classic brawl moments.

The music had to be 99% provided by an organist that was well concealed on the upper north side of the stands (You could barely see him if you were sitting top row beneath him). In fact, the only time I can remember actual music playing was when the Royals would come out of their dressing room during play-offs (We Will Rock You). All official announcements were bilingual (My grade 7 teacher was the back up announcer).

They once had a mascot called Big Blue. Picture a low-budget version of the A&W bear but blue with a large hand-held bell. Mind you this was before my time as a fan so I'm guessing he was gone by the early 80's or late 70's.

During second intermission, they had a shoot-out contest for the fans. You were supposed to qualify by purchasing program and getting a lucky number. But programs were not popular (they rarely were updated it seemed), so the trick was to go to the souvenir stand at the main entrance of the arena and ask right before the intermission if they had three winners yet, if not, you were in. I must have shot at least four times and managed to win $200 in Shell gas once (Useless to a 13-year-old but my parents were happy). I never saw or heard of anyone winning the car which was a shot to the far net in a hole the size of the puck.

Another intermission thing was that if you wanted to go into the main concourse of the building (which is where they sold tickets and where the bar was) you'd get a gate pass. This was before scanning was available so if you could manage to somehow sneak back into the arena with your gate pass in hand (this is where that funny floor level area came in handy), you could possibly get into a future game for free. These gate passes were color coded but were always being recycled.

Again, the arena itself was not characteristic in an old fashion way or high tech. It was a very well balanced, concrete and seats type of place that was very uniform with the exception the missing last bowl of seats. I'm sure it could be updated no problem (basically it would need a new model time clock with a screen).

Apparently the arena would be filled to capacity when the Royals were part of the QMJHL where they won a Memorial Cup. But once a part of the OHL, they lost the die-hard hockey fans that used to travel across the near by Ontario border from Quebec and attendance was a problem. The Royals left town for Newmarket and the arena became home to the AHL team the Cornwall Aces, the Quebec Nordiques farm team. This team was short-lived in Cornwall due to the Nordiques' move to Colorado. The team stayed in Cornwall one more year after the move and Ed Lumley Arena has not housed a full-time team since.

Not much has been done to the Complex since besides conventions, receptions and the occasional pre-season NHL game, concert or Cornwall Colts game. Most recently, they have begun construction on an aquatic centre/curling club that will be connected to the building and is expected to spark new life for the Complex. I also heard a rumor that the city was approached by the QMJHL to house another team but as far as I know nothing has come of it. 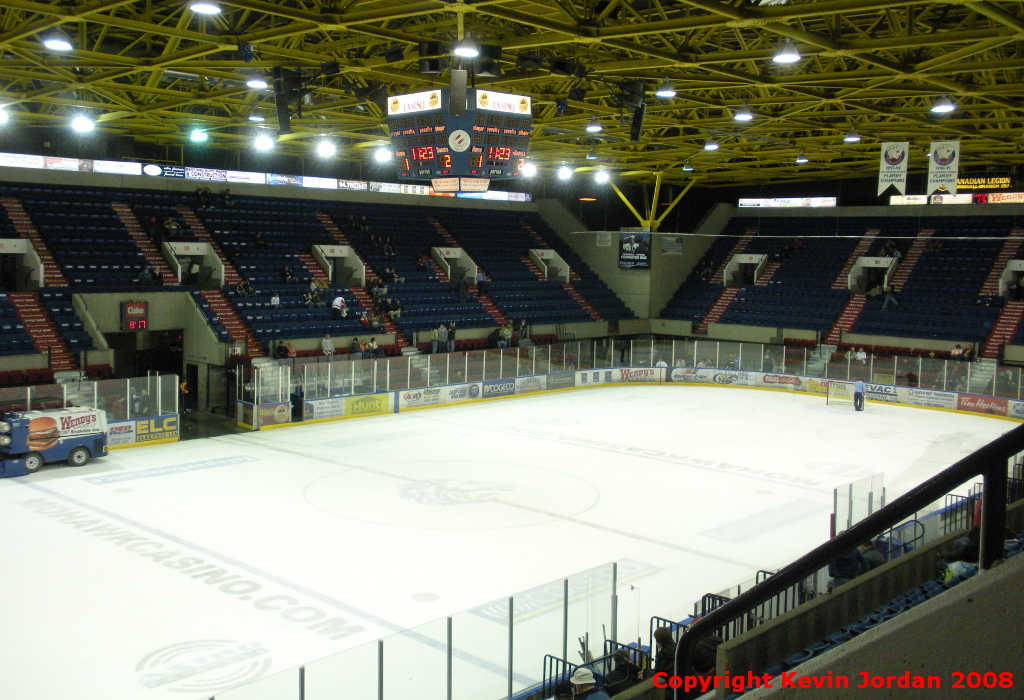 What's the Arena Used for Today?
The Ed Lumley Arena is a part of the Cornwall Civic Complex, which is the city's main event centre. The primary tenant is the Central Junior A Hockey League's Cornwall Colts. The Complex is also in constant use with trade shows, minor hockey, swimming, conventions and other stuff.

The Royals started out as a QMJHL team in 1969 but transferred over to the OHL in 1981. The team played at the Civic Complex for their entire OHL lives, but from 1969-76 the QMJHL Royals played out of the Water Street Arena (later renamed Si Miller Arena), which was across the street from the Civic Complex on Water Street. 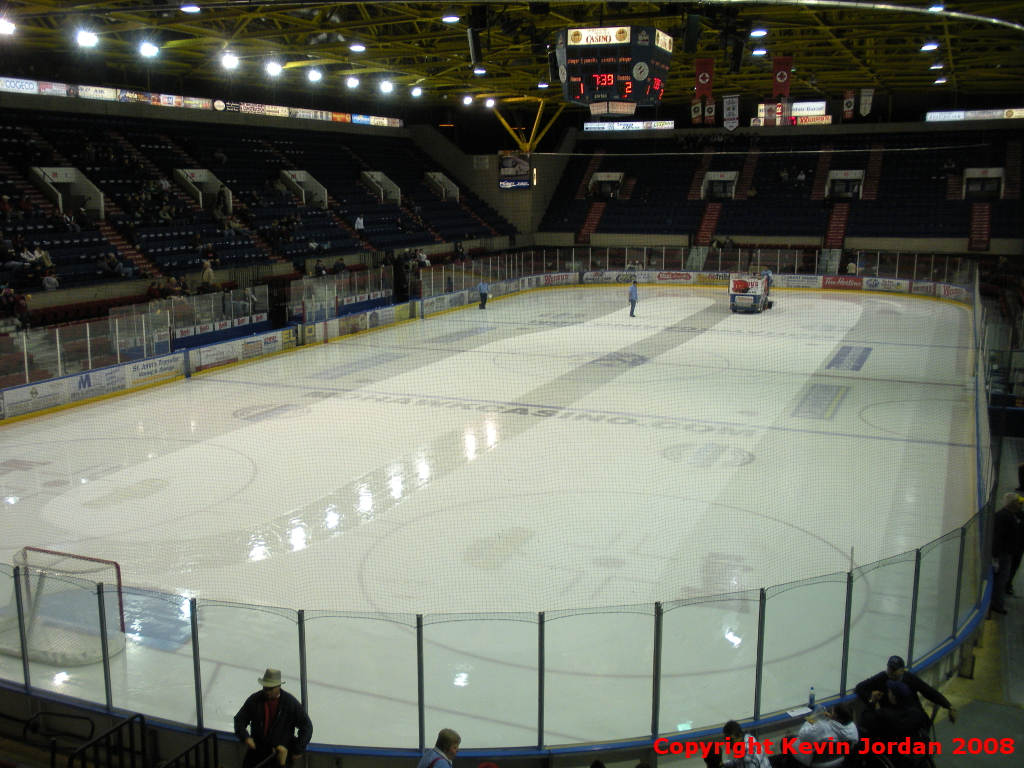