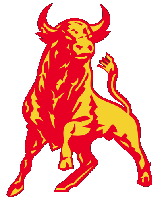 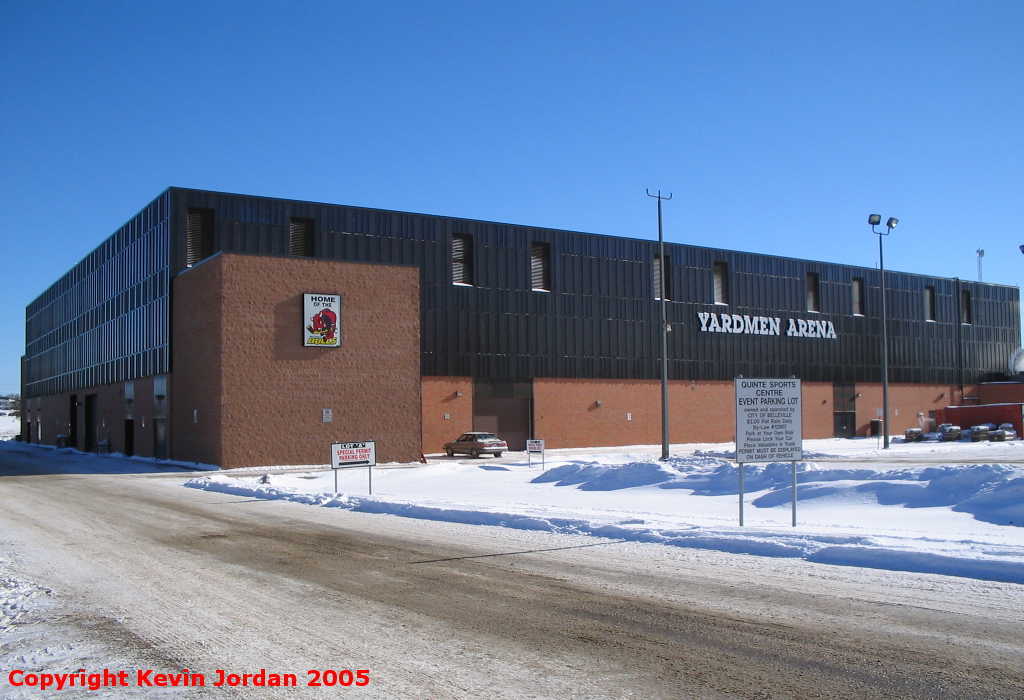 In 2017-18, following a long-promised renovation to the Yardmen Arena, the Ottawa Senators moved their AHL team to Belleville. I went to a Belleville Senators game in March 2018, and found the expanded Yardmen mostly as it was before, only with new seating in one end, a more professional presentation, and an ice surface shrunk to regulation sized. The only real disappointment of the new arena is that all signs of the Bulls have been erased from the building; the banners are gone, and even the Belleville Sports Hall of Fame on site is devoid of mentions of the city's OHL history. But still, while the Bulls no longer exist, the city of Belleville has had a happy ending after having their team abducted in the middle of the night, and it was good to see hockey once again thriving in the Quinte region.

I'm preserving my Belleville review unchanged as it was before they moved to Hamilton.

If it wasn't for the 1999 OHL final that broke my 17-year-old heart, the Belleville Bulls would probably be my second-favourite team in the OHL. The Bulls usually have a clean, fast team that play hockey the way it should be played. They have incredibly awesome old-school uniforms. The best wings in the league are just down the street at Slapshot's Bar & Grill. They personify small-town hockey, with their intimate community rink and friendly, charming fans. The Olympic-sized ice surface is the most obvious unique thing about the Yardmen Arena, but in many ways the arena feels like an upgraded Owen Sound - an intimate small-town community rink, only more solidly built, more brightly lit, and with equally friendly fans.

Yardmen Arena is a large, orange and brown building located footsteps off the 401. The words "Yardmen Arena" are spelled out in huge letters and there is also a small sign on the front of the arena reading "Home of the Bulls". The building looks huge from the outside, but appearances can be deceiving - it is actually the OHL's second-smallest behind Niagara. The arena is a part of the Quinte Sports Centre complex which also includes Wally Dever Arena, a smaller community barn. There is lots of parking in behind the building, and most fans enter the place from the rear doors.

Once inside the main entrance to the arena is up a flight of stairs. The walls of the foyer feature the Belleville Sports Hall of Fame. Once you're upstairs, you pass the old ticket booths (the new ones are downstairs) and enter the arena. The main gate features no view of the ice as it is blocked off by the Bulls' offices, a team store, and the offices of the Belleville City Parks and Recreation department. The walls are painted light blue and gold and the concession areas and souvenir stands are all directly in front of you as you enter the seating area. You either turn left or right to get to your half of the building.

The Yardmen is laid out in a two-grandstand design with virtually no seating apart from standing room in the ends. All the seats are green and plastic, and relatively comfortable. The narrow concourse runs along the back of the seating area and bottlenecks during the intermissions. There is also a pair of balconies hanging over the seating areas; tickets for those seats are more expensive and admission is barred unless you have a ticket. The view up there is terrific though - high in the rafters, you can see the play developing perfectly, and you're still close enough to feel like you're on top of the action. It's among the OHL's best views. The press box is up in the rafters as well. There used to be banners hanging over the ice, but with the installation of the video scoreboard and low rafters, there wasn't room for them anymore, so they have been moved to one end of the ice along the wall. The far end of the rink is history central, with all the team's banners and team pictures from every season they've played in Belleville. The banners also commemorate not only the Bulls' history, but all of Belleville sports history including teams which won the Allan Cup and other trophies in the 1950's. While the Bulls are younger than some OHL teams, all of the team's history is on display, which is a big plus from my perspective. They also have a strange-looking "Bull" hanging on one side of the building. I don't think it's a stuffed head, but it's definitely designed to look like it.

The ice in Belleville is the OHL's biggest - it's basically Olympic-sized. Watching your team take on the fast-moving Bulls team is either a treat or an ordeal depending on how your team is built. It's one of the biggest home-ice advantages in the league, and the Bulls team is usually built to take advantage. The scoreboard has a full video board, but it's not used to any particular great use - the play is not broadcast during games, and the game I went to also barely ever showed replays. It raises the obvious question as to why the city paid to install a video scoreboard if they're not going to use it properly. There is also a second scoreclock hanging in the end, but since the installation of the video board, it's not used anymore. I don't know why - it would be a decent supplement. Sound quality is good from new speakers, as is the arena announcer. There weren't too many promotions which I quite enjoyed as it kept from being a distraction. The first game I went to in Belleville was unnaturally cold, and I shivered my way through the game in spite of wearing two layers and a winter jacket. However, the temperature issue seems to be fixed as of my second visit.

The railway history of Belleville permeates the team - "Yardmen" refers to the men who work in the CN rail yards - and whenever the Bulls score, the goal horn is actually a train whistle. It's a great little touch. There are plans afoot to expand the Yardmen by making the seating "U"-shaped, and when they do the arena's seating capacity will match the Bulls' aspirations. The Bulls have the highest average percent-capacity rate in the league year-to-year, and once the Yardmen rises to a more reasonable seating total the Bulls will become one of the league's best-supported franchises.

In 1999 my six were blown out on Yardmen ice in Game 7 of the OHL final, and for that reason alone I was prepared to hate the rink from Day 1. But it's simply impossible to hate the Yardmen Arena or the people of Belleville. The Bulls are one of the remaining teams that don't feel like a big corporation; they're simply a local hockey team playing hockey the way it should be played. In Canada, we idealize the mythical small-town hockey club even as the NHL and CHL move quickly away from that ideal. Bellevile is one of the teams that still comes close to the Platonic ideal of a good, small-town Canadian hockey team, and seeing that alone makes it worth the trip. 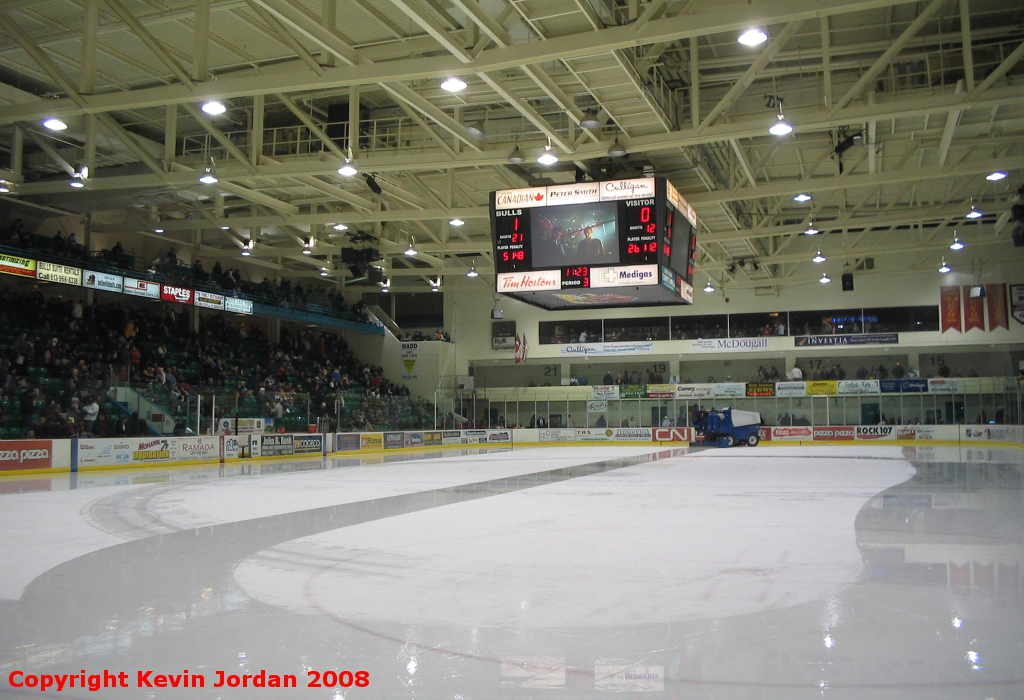 What's the Arena Used for Today?
2017 was always the date that the city of Belleville had pencilled in to renovate and expand the Yardmen Arena. Gord Simmons, the owner of the Bulls, wasn't willing to wait that long, and he sold the team to Michael Andlauer who them moved to Hamilton in 2015. But the renovation still went ahead on schedule in anticipation of another team moving in. Work started in November 2016 and was completed in the fall of 2017; the project expanded seating capacity to 4,400 and shrank the ice surface size to regulation. There's now new seats circling the ice down by the rink boards and a massive permanent grandstand on the north end of the building, while the south end has also been overhauled and is now home to a fan zone. The scoreboard and dressing rooms were also overhauled. The arena looks great, and should be home to high-level hockey for decades to come.

Yardmen Arena is now home to the Ottawa Senators' AHL affiliate, the Belleville Senators. The building is now known as CAA Arena. 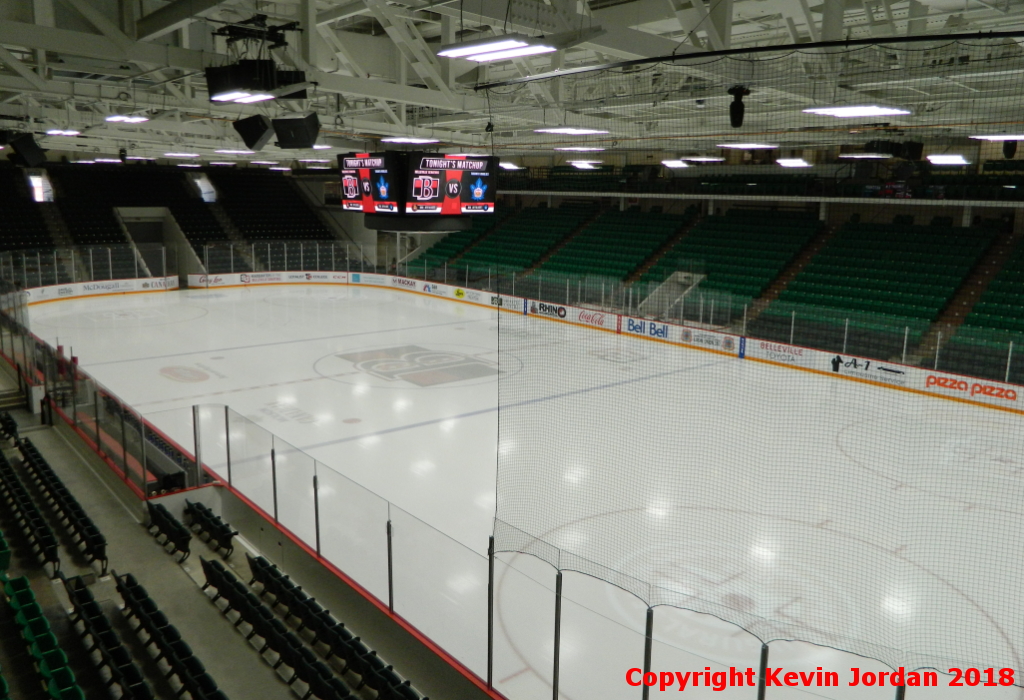